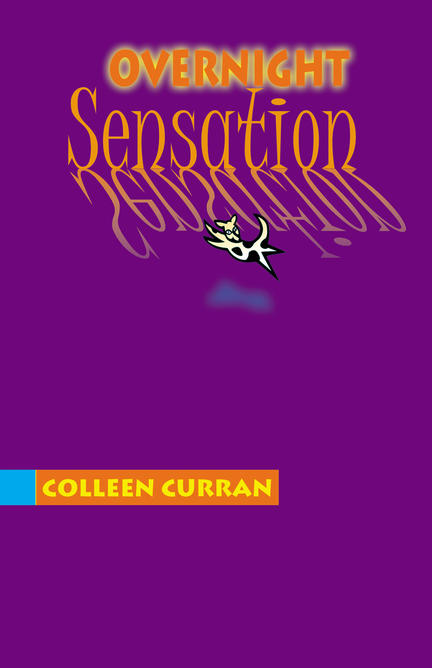 Overnight Sensation is the independent and richly entertaining sequel to Colleen Curran's hilarious first novel, Something Drastic. Lenore Rutland, an unsophisticated but astute singing waitress in a Montreal theme restaurant, is a best friend with her tenant, Heidi Flynn, an English professor. Their neighbour, Reine Ducharme, an expert gardener and maman to a pair of spoiled lap dogs, has poisoned six of her colleagues on a jury that released a murderer. With Reine in prison, Lenore becomes foster-maman to the dogs, Brioche and Montcalm.

As Overnight Sensation opens, Lenore is recruited as a guest on the Neighbours of Neighbours Who Murder segment of Fiona!, a TV talk show with millions of avid followers. Because of her honesty, she accidentally gets the better of the vicious Fiona. Suddenly famous, she wins instant recognition at a Canadiens game, a would-be husband, and a fan club consisting of the nieces of Heidi's jilted suitor.

Hoping to gain the upper hand occasionally, Lenore and Heidi take Brioche and Montcalm to obedience school. There, a casting director "discovers" the pampered darlings for a made-for-TV movie, Gamon de Pycombe: Dog of the Titanic. The movie behind her, Lenore pursues her sensational amateur acting career as the star of Bells Are Ringing, and at the same time she and her boss, Gaëtan (the lover of Heidi's fireman brother Daniel), save the restaurant from bankruptcy. Romance advances and recedes for everyone and there are laughs aplenty, plot complications galore, and even a few tears.

Overnight Sensation is a gentle satire that, like Something Drastic, contains more than a kernel of psychological truth in its humorous core.

Montreal playwright and performer Colleen Curran is the author of many popular dramas for theatre and radio. Her first novel, Something Drastic, was a finalist for the first Prix Parizeau, and Nicola Cavendish's reading of it is a perennial favourite on CBC Radio's Between the Covers.

"A generous and charming measure of wisdom leavened with wit and whimsy."

"Funny all the way through... More, please."

Other titles by Colleen Curran

El Clavadista, A Sort of Holiday & Amelia Earhart Was Not a Spy