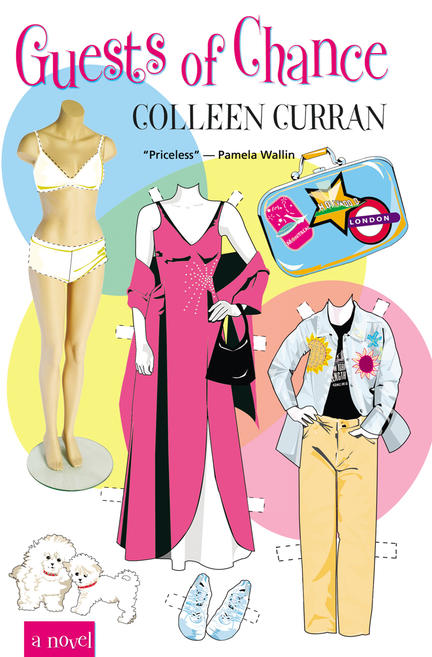 Colleen Curran returns with her latest novel, Guests of Chance, completing the hilarious trilogy that has taken readers through break-ups, make-ups, fierce friendships, a trip to Hollywood and everything in between.

Starring Lenore Rutland, an unsophisticated but astute former singing waitress who owns a theme restaurant in Montreal, Guests of Chance is proof that life can be an adventure. The new novel picks up where Curran left off in Overnight Sensation.

Without skipping a beat, our heroine finds herself nervously flying away from her beloved Montreal to England, all the while reflecting on her "star turn" at the Oscars. She has left behind her beloved partner Benoît and her collection of unique friends: Madame Ducharme, who is doing time for poisoning six of her fellow jurors when they let a murderer go free; heartbroken Viola, whose lesbian lover has left for Toronto with her much younger, slimmer and more glamorous new love interest; Heidi's fireman brother Daniel, who hasn't told their parents that he's gay; Elspeth and her odious husband; and Madame's spoiled lap dogs, Montcalm and Brioche. Lenore's best friend Heidi, a professor of English, has persuaded Lenore to come to England with her for moral support as she tries to discover whether her handsome pen-pal "boyfriend" is the real deal.

Akin to Bridget Jones's Diary and My Big Fat Greek Wedding, Guests of Chance is a laugh-filled romp with two inexperienced thirty-something travellers, enchanting new readers and making those who met Lenore in Something Drastic and Overnight Sensation fall in love with her all over again.

Montreal playwright and performer Colleen Curran is the author of many popular dramas for theatre and radio. Her first novel, Something Drastic, was a finalist for the first Prix Parizeau, and Nicola Cavendish's reading of it is a perennial favourite on CBC Radio's Between the Covers.

"Sensational? You bet... Curran shows great dexterity in guiding a large cast through a complex plot."

"If there's such a thing as genial anarchy, then Curran knows how to create it."

"Funny and refreshing... much fun to read."

"Colleen Curran plays for laughs and comes up with a winner."

"A genius for satire."

Other titles by Colleen Curran

El Clavadista, A Sort of Holiday & Amelia Earhart Was Not a Spy