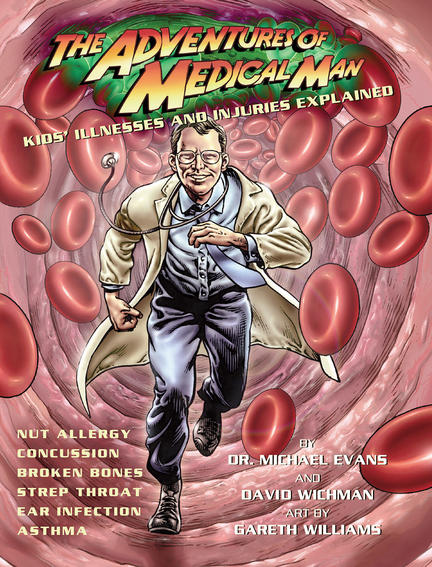 Enter Dr. Michael Evans, who will explain to young readers everything they need to know when an illness or injury occurs. Uniquely structured around five different movie genres and one comic book, each chapter features a common illness or injury with Dr. Mike in the starring role, explaining the causes, symptoms and cures.

Whether it’s a nut allergy in the action-packed “They Came From Mars!,” a broken wrist in the bone-chilling “The Werewolf Who Snapped” or strep throat in the suspense-filled “Adventures of Medical Man and Wondrous Boy,” each story is packed with fascinating medical information. Other common conditions covered in the book include concussion, ear infection and asthma—all vividly explained.

Complete with diagrams, sidebars and a glossary—and dramatized by Gareth Williams’s stunning illustrations—this book will be a comfort to any child dealing with an injury or illness.

“… provides a stimulating outlet for [kids] to scratch that unbelievable itch for knowledge and make it entertaining at the same time … one of the coolest science books I’ve ever seen.”—wordofmousebooks.com, 04/11

“The writing and illustrations are energetic and lively and the medical facts … are woven seamlessly into the storyline.”—Resource Links, 02/11

“… this book does a fantastic job of explaining common medical issues in an accessible way. While the stories are inventive and entertaining, the medical facts are at the forefront, and readers will come away thinking about these conditions in a whole new way.”—School Library Journal, 02/11

The Adventures of Medical Man: Kids’ Illnesses and Injuries Explained

The cover of this book will remind those of you who were around in the ’60s of that classic science fiction film, Fantastic Voyage. Our intrepid author, Dr. Michael Evans, is charging through a blood vessel, dodging red blood cells, on his way to fight some evil disease or injury. The story finds Dr. Evans taking on a superhero persona in five mini-movies (and one comic book) that explain what happens to the body when it is attacked by common childhood invaders – concussion, broken bones, strep throat, ear infection, asthma and nut allergy.

The tale of each invader is told in classic movie style by Evans and co-author David Wichman. The Case of the Dizzy Dame describes a concussion, The Werewolf Who Snapped deals with broken bones, The Hurt From Red Eardrum uses The Hunt for Red October’s submarine theme to talk about earache and Asthmatic Mike and the Temple of Wheeze is a cute take on Indiana Jones. Each illness is described through a fast-paced story; Dr. Mike and his young friends, Billy and Sally, battle foreign invaders while learning about the various body systems and how things can go wrong. Between each main chapter, our heroes confront Billy’s nut allergy as his symptoms worsen.

There is a lot of good information here in a format that will appeal to young fans of adventure movies and comic books, probably more to boys than to girls. The illustrations are very much in the comic book style, a bit garish and creating a slightly 3D effect, but effective at explaining the workings of the body. There is quite an extensive glossary and a good index. Overall, the book’s original approach adds excitement to the study of the human body and should appeal to both reluctant and curious readers.

The Adventures of Medical Man: Kids’ Illnesses and Injuries Explained

Being sick or injured can be scary for kids, but knowing how their bodies work can take the fear away. Dr. Mike explains the symptoms and cures for six common childhood ailments from asthma, ear infections and strep throat to nut allergies, broken bones and concussions. Five chapters are modelled after different movie genres, and one is written in comic-book format. A helpful glossary of terms is included.

Other titles by Michael Evans