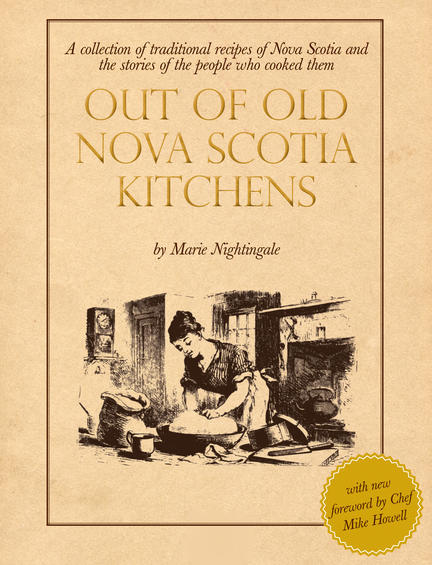 Now an established regional classic, Out of Old Nova Scotia Kitchens was first published in 1970 and became an instant hit, selling more copies than any cookbook ever published in the province. A collection of traditional Nova Scotia recipes, the book remains extremely popular today and has proven to be a practical guide as well as a delight for armchair cooks. Besides providing easy-to-use recipes for the province’s traditional dishes, Marie Nightingale also tells the stories of the people who prepared this unique cuisine.

This fortieth anniversary edition includes an updated look throughout, a foreword from Chef Michael Howell at Tempest Restaurant, and a new introduction from the author on the book's incredible and long-lasting success.

Michael Howell is a Canadian chef who resides in Nova Scotia. A successful 25+ year career has seen Michael cooking in Chicago, New York, Boston, Detroit, Toronto, and the Bahamas. From 2002 until 2012, Michael owned and operated Tempest Restaurant in Wolfville, Nova Scotia. In 2011, Michael was named the Province of Nova Scotia's Local Food Hero and in 2012 Michael was awarded the Queen Elizabeth II Diamond Jubilee Medal for contributions to the food movement and community in Canada. Michael is the Consulting Executive Chef at the Green Turtle Club in Abaco, Bahamas, and the founder and Executive Director of Devour! The Food Film Fest.

Marie Nightingale's accomplished career as a food writer and editor includes twenty years as food columnist for the Halifax daily newspapers, the Chronicle Herald and the Mail Star. She is the author of Out of Old Nova Scotia Kitchens, Out of Nova Scotia Gardens, and Cooking with Friends, a nominee for the 2004 Cuisine Canada/University of Guelph National Culinary Book Award. She lives in Halifax, Nova Scotia.

Other titles by Michael Howell

Other titles by Morna MacLellan - Anderson

Out of Nova Scotia Gardens

Out of Old Nova Scotia Kitchens