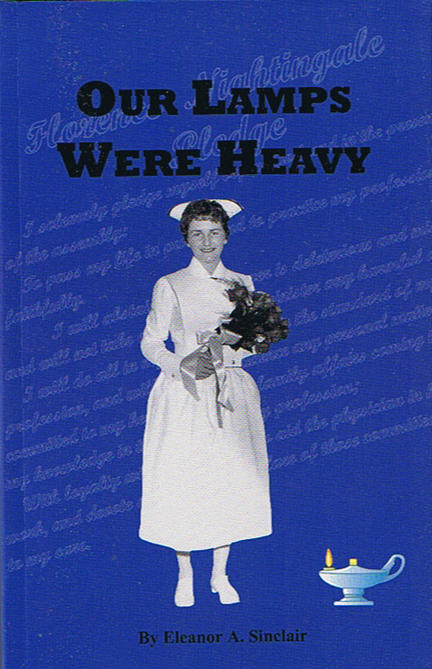 Eleanor Sinclair opens the yellowed pages of her daily diaries and revisits the three years she spent training at the Holy Family Hospital School of Nursing in Prince Albert, Saskatchewan in the 1950s. She tells of the austere Sisters who trained her, describes everyday happenings in the hospital and nurses' residence, shares shocking stories about hospital life, and tells all that it took to earn a gold pin and a nurse’s cap with the treasured black band.

Excerpt: Our Lamps Were Heavy (by (author) Eleanor A. Sinclair)

Another caution that we became acquainted with very early on was the physical and verbal abuse we suffered from drunks or mentally deranged patients.
It seems to go with the profession. Nurses still get pushed, shoved, sworn at, their hair pulled – some of the things about nursing that have NOT changed and, dare I say, likely never will. There was no practising psychiatrist in Prince Albert at the time, which meant we dealt with psychiatric cases on the ward until they became severe enough to be sent to the Mental Hospital in North Battleford. Meanwhile, we worked in fear and uncertainty, glad for the heavy tranquilizer orders that would put the patients down. Alcoholism was considered more of a behaviour than a condition. Rehab was far, far into the future.

DIARY ENTRY
March 18th:
First time I have had anything to do with a mental patient. Mrs. Brans is agitated, fretful and feels worthless because she can’t have a baby. She talks about it incessantly and disturbs everyone on the ward. I felt sick when the ambulance men came to take her to the North Battleford Mental Hospital because she looked right into my eyes in desperation and said, “Can’t you help me?” – sort of haunting.
Thankfully, that story did not end there. In my third year of training, Mrs. Brans was back in our hospital again, but this time to deliver a baby!

DIARY ENTRY
1½ years later:
At 5:25 a.m., Ingram admitted Mrs. Brans to the old case
room and she came off Bam! Bam! How well I remember
this lady from First Floor who went to N. Batt. for treatment – she was so desperate to have a baby and now she’s got her kid. Hooray for her.