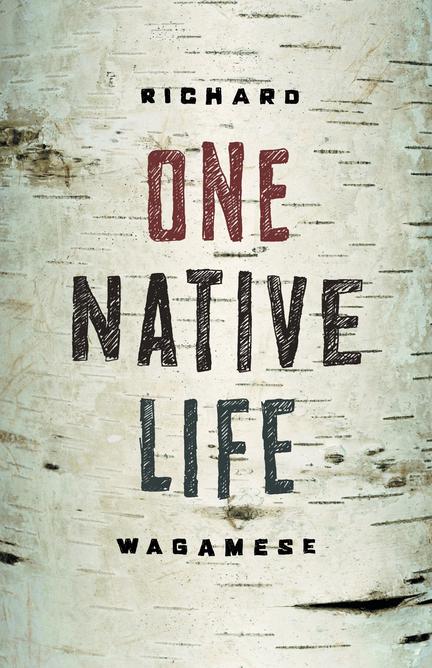 In 2005, award-winning writer Richard Wagamese moved with his partner to a cabin outside Kamloops, B.C. In the crisp mountain air Wagamese felt a peace he'd seldom known before. Abused and abandoned as a kid, he'd grown up feeling there was nowhere he belonged. For years, only alcohol and moves from town to town seemed to ease the pain.

In One Native Life, Wagamese looks back down the road he has travelled in reclaiming his identity and talks about the things he has learned as a human being, a man and an Ojibway in his fifty-two years. Whether he's writing about playing baseball, running away with the circus, attending a sacred bundle ceremony or meeting Pierre Trudeau, he tells these stories in a healing spirit. Through them, Wagamese celebrates the learning journey his life has been.

Free of rhetoric and anger despite the horrors he has faced, Wagamese's prose resonates with a peace that has come from acceptance. Acceptance is an Aboriginal principle, and he has come to see that we are all neighbours here. One Native Life is his tribute to the people, the places and the events that have allowed him to stand in the sunshine and celebrate being alive.

"One Native Life is a journey, snapshots of events as Wagamese moves through a life of loneliness, forever searching for that place to belong as he travels to reclaim an identity denied him as a child. Within these vignettes, we see the joyous spirit Wagamese has become."

"Writing with appealing warmth and gentle humour, he is frank about his insecurities and failings. Rather than play the blame game, [Wagamese] concentrates on appreciating the people who nurtured and helped him when he needed it most."

"Delicate and strangely beautiful, each vignette (written in early dawn) seems to radiate from point to luminous point...This is the language of trauma and its miraculous recovery, a beautiful and important Canadian work."

"I have been touched deeply by Richard Wagamese's reflections on life, adversity, and healing...His message of hope and belonging urges every Canadian to set out each dawn to find meaning in ourselves, figure out where we belong, and nurture our humanity."

"Each story -- almost without exception -- is positive and uplifting, meaningful and supportive of his new, well-anchored life. All of his memories are formed from the vantage point of where he is now, a tribute to the qualities of memoir...Grounded as he now appears to be, and secure in his identity, Richard Wagamese in his 50s may be just hitting his stride."

"Wagamese wrote movingly -- and with applauded bravery for his openness -- about his abuse and booze-damaged past in the 2002 memoir For Joshua, addressed to his son. In what reads as almost a continuation of that earlier book, One Native Life describes the author's continued emotional healing, a recovery with his Anishnabeg roots at the core."

"[Richard Wagamese's] latest book of nonfiction showcases him as a writer of insight and eloquence, as it recounts episodes of his life from childhood onward. Whether about growing up in foster care or about reuniting with his Ojibway heritage, the dozens of original essays that comprise One Native Life extol the virtues of reclaiming displaced identity and healing through a sense of belonging."

"This design is perfect in its simplicity: it captures the personal content and informal tone of Wagamese's writing in a quiet, inviting, and unassuming way. There's a sense of both narrative and history in the birch-bark background."

"[Wagamese's] memoir is an insightful look at his search for his roots and the traditions binding him not only to his people but the 'great, grand circle' of humanity."

"In quiet tones and luminous language, Wagamese shares his hurts and insights and joys, inviting readers to find the ways in which they are joined to him and to consider how they might be joined to others."

"The power of...One Native Life lies in its ability to explain how the residential school system affected not only the generations of natives who attended, but those who followed, and what needs to be done to rebuild families. Yet what has the potential to be a depressing and difficult read is instead an incredibly inspiring book, on that should be read by all Canadians."

This is a compilation of essays and reflections on how writer Richard Wagamese discovered his roots and his purpose. Taken by the government from his family as a very young child in the “Sixies Sweep”, he felt displaced and isolated as he was sent to live with a series of white families. After running away at age sixteen, he experienced homelessness, low income jobs and a transient lifestyle. Thanks to the praise and encouragement of two teachers, he held onto his dream of becoming a writer. He eventually got his first writing job as a newspaper editor, spending days in the library studying books on journalism and writing.

Wagamese is the author of the bestselling and award-winning Keeper’n Me. He became the first Aboriginal Canadian to win the National Newspaper Award for Column Writing. He received the Canadian Author’s Association Award for Fiction for 2007.

This edition restores the original full text of Emily Carr’s classic text and the 1951 foreword by Ira Dilworth. It is a collection of Carr’s stories and impressions of the lives of BC’s First Nations people from her time travelling and living with them as she painted their villages and totem poles. The writing provides a vivid portrait of the people, as well as her negative views of how they were treated by the missionaries. Editions available since 1951 were based on an expurgated educational edition that had been edited to remove any possible ‘objectionable content’. Included is a new introduction by Kathryn Bridge that gives context to the writing through information about Carr and the expurgating of previous editions.

Carr is one of BC’s most wellknown artists and writers.

Caution: Contains some stereotyping language and depictions of First Nations people that could be considered racist.

This is a collection of autobiographical short stories and vignettes from the life of the author, Richard Wagamese. He tells stories of events large and small in his life that have contributed to who he is today. These include stories about his foster families and adoptive family, his experiences as the only Aboriginal student in his schools, his reconnection with his Ojibway birth family, and stories of his time homeless and living in poverty. Most of the stories are only a few pages long, and there is a current of humour running throughout the book, even though there are stories of hard times and bad things happening.

Most of the stories in this book have previously been published in newspapers and magazines or broadcast on the radio.