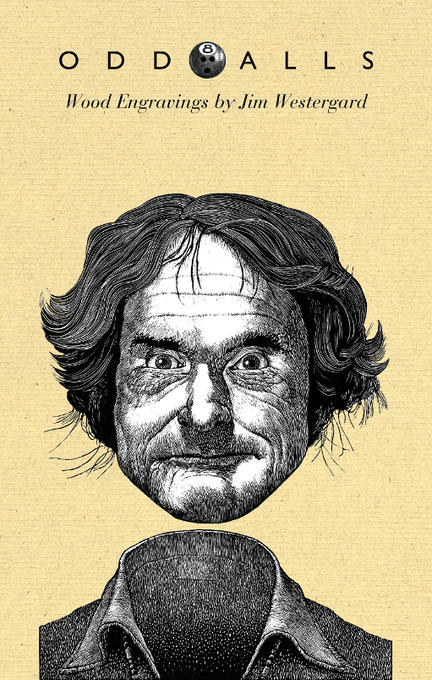 Jim Westergard was born in Ogden, Utah in 1939. He was educated at a variety of colleges and universities in California, Arizona and Utah where he completed his BFA and MFA at Utah State. Westergard taught at Metropolitan State College and Northern Illinois University before moving to Alberta in 1975, where he taught at Red Deer College until his retirement in 1999. He became a Canadian citizen in 1980.

Jim Westergard has been creating prints from wood engravings since university days in the late 60s, but had never completed a book-length collection until the original limited letterpress edition of Mother Goose Eggs. The first engraving for this project was finished in 1999. Then, after a four-year struggle which included an unexpected hernia operation and reprinting the press-sheets a second time with helpful hints from Crispin Elsted of the Barbarian Press (Mission, BC), Mother Goose Eggs was finally bound and released in a deluxe edition of eighty copies in 2003.

All of Oddballs' wood engravings should be appreciated with second and third glances in recognition of the painstaking, hands-on nature of their medium.

Westergard curated this quirky group over several years, noting how history "has been very generous with its supply of oddballs" and how "the walls of an oddball gallery could stretch to infinity." Some of Oddballs' accounts involve a few simple paragraphs, while others go on in more detail. Pop art icon Andy Warhol has a brief and quizzical biography, while the tale of the Mad Trapper of Rat River is tragically elaborated.

Also featured are radio evangelist Aimee Semple McPherson; the Russian monk Rasputin; and sixty-three-year-old widow Annie Taylor, who became the first person to survive going over Niagara Falls in a pickle barrel. Each story is engagingly written by Westergard, and the oddball assortment is a diverse one.

What makes Oddballs truly memorable, however, are the wood engravings. Clearly a master of the technique, Westergard presents finely wrought likenesses of his subjects. As noted in the introduction by fellow expert wood engraver Barry Moser, the medium uses surgically sharp steel tools and is exacting and "unforgiving," rivaled in difficulty only by mezzotint or fresco.

To enhance his technical finesse, Westergard sometimes adds a touch of relevant humor to his portraits. Germophobe Howard Hughes looks nervously at a cockroach on his shoulder, a man called "Frozen Dead Guy" enjoys a popsicle, and the aforementioned Andy Warhol eats a bowl of (presumably) Campbell's soup.

The wry humor continues as Lizzie Borden of the many ax whacks poses with a Mona Lisa-like smile, and tiny fairies dance around Sir Arthur Conan Doyle, due to the Sherlock Holmes creator's tendency to be duped by phony spiritualists.

Journalist Hunter S. Thompson, with his trademark cigarette holder and dark glasses, is one of Oddballs' best depictions, which might very well have been appreciated by Thompson himself had he not, as the book reveals, committed suicide in 2005 and requested to have his ashes shot skyward out of a cannon.

The lesser-known folks among the pages, such as Canadian conservationist Archie Belaney, also known as Grey Owl, and Emperor Joshua A. Norton of San Francisco, are curiosity-inducing and will doubtless prompt follow-up Google searches.

All of Oddballs' wood engravings should be appreciated with second and third glances in recognition of the painstaking, hands-on nature of their medium, which flourishes here, even in an otherwise fast-paced and digital world.

'With Oddballs Jim's hands keep up with his prolific imagination and wit, his engraving and writing complementing each other, bringing out the very best of his unique vision. The layout of the book features a spread dedicated to each 'character', the title and tale on the left and the engraved portrait on the right. This arrangement works wonderfully, forming a diptych of Westergard's ingenious and often humorous observations, written and engraved. Ideas expressed in the biographical text often take a visual form in the portrait created.

'Oddballs is a master's class in the art of wood engraved portraiture.'

Other titles by Jim Westergard

Fly on the Wall

A gallery of amazing weirdos.