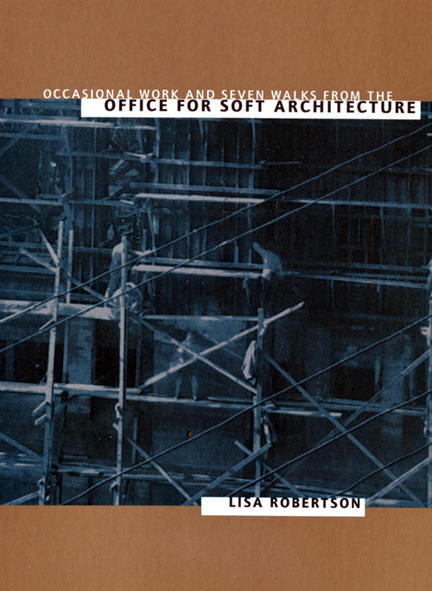 What if there is no ‘space,’ only a permanent, slow-motion mystic takeover, an implausibly careening awning? Nothing is utopian. Everything wants to be. Soft Architects face the reaching middle.

If architecture is the language of concrete and steel, then Soft Architecture needs a vocabulary of flesh, air, fabric and colour. It’s about civic surface and natural history. It’s about social space and clothing and urban geography and visual art, and some intersection of all these.

This delectable book collects the rococo prose of Lisa Robertson, the ambulatory Office for Soft Architecture. There are essays on Vancouver fountains, the syntax of the suburban home, Value Village, the joy of synthetics, sca×olding and the persistence of the Himalayan blackberry. There are also seven Walks, tours of Vancouver sites – poetic dioramas, really, and more material than cement could ever be.

Soft Architecture exists at the crossroads of poetry, theory, urban geography and cultural criticism, some place where the quotidian and the metaphysical marry and invert. The most intriguing book you’ll encounter this year.

‘We say, on almost every page and with utmost reverence, Holy shit. … Ever since, we have wanted to think like Robertson, write like her, maybe even be her.’ – The Village Voice, listing it as a top pick of 2004

‘She plucks a subject (object) from the quotidian and banal in order to move through it, uncovering layers of the historical, the lyrical, and the political. The result feels somehow psychedelic.’ – The Stranger

Lisa Robertson is a Canadian poet and essayist currently living in France. Born in Toronto in 1961, she was a longtime resident of Vancouver, where in the early 90s she began writing, publishing and collaborating in a community of artists and poets that included Artspeak Gallery and The Kootenay School of Writing. She has continued these activities for 30 years, publishing books, leaflets and posters, translating poetry and linguistics from French, lecturing and teaching internationally, and continuing her ongoing study into the political constitution of lyric voice. In 2017 she was awarded an Honorary Doctorate in Letters by Emily Carr University of Art and Design, and in 2018, the Foundation for the Contemporary Arts in NY awarded her the inaugural CD Wright Award in Poetry. She has taught at Cambridge University, Princeton, UC Berkeley, California College of the Arts, Piet Zwart Institute, Jack Kerouac School of Disembodied Poetics and American University of Paris, as well as holding research and residency positions at institutions across Canada, the US, and Europe.

Other titles by Lisa Robertson

Cinema of the Present

Occasional Works and Seven Walks from the Office for Soft Architecture