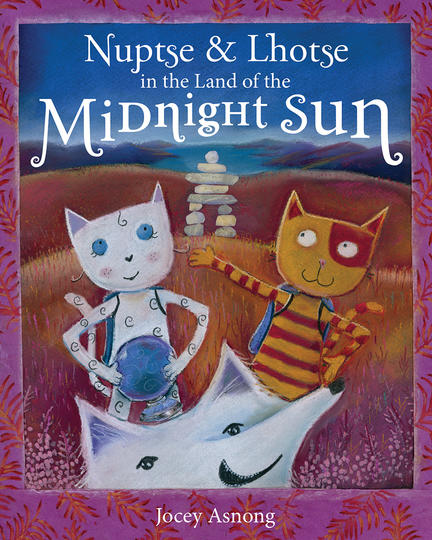 With imaginative text and colourful artwork, Nuptse and Lhotse's latest adventure showcases the history, culture, and environment of the Yukon, Northwest Territories, and Nunavut.

Welcome to the Land of the Midnight Sun!

While waiting for the first snowfall of winter to arrive, Nuptse and Lhotse are excited when they find an unusual snow globe in their home that can change the weather. With the help of Roald, a Polar Explorer Fox, they set off together on an adventure to northern Canada and the Arctic, on a quest to find the great treasure of the north.

As they make their way from the Chilkoot Trail to the North Pole through all the four seasons, the cats will try panning for gold, ride a caribou across the tundra from boreal forest to the Arctic Ocean, and sail among ice floes in the Northwest Passage with the help of an Inuit hunter. With several surprises along the way, the cats learn many fascinating things that make this land and its history unique, from bird migrations and prehistoric animals, to ice blinks and shipwrecks, to permafrost and polar ice caps. Will Nuptse and Lhotse find the great treasure of the north?

Jocey Asnong was raised by a pack of wild pencil crayons in a house made out of paper and stories. After finishing several years of illustration school at Sheridan College, she left the land of maple trees in Ontario and moved to the mountains of Alberta so she could wear mittens most of the year. When she is not chasing her cats around her art cave in Canmore, she might be caught in a blizzard near Mount Everest, or running away from wolf dogs in Mongolia, or peeking out castle windows in Scotland, or sleeping under the stars in Bolivia. Jocey’s illustrations can be found in all kinds of unusual places, as well as in the picture books Mushkid, The Princess and the Cheese, Nuptse and Lhotse in Nepal (winner of a Purple Dragonfly Award), Nuptse and Lhotse Go To the Rockies (RMB, 2014), Nuptse and Lhotse Go to Iceland (RMB, 2015), Rocky Mountain ABCs (RMB, 2016) and Rocky Mountain 123s (RMB, 2017). She lives in Canmore, Alberta.

"With imaginative text and colourful artwork, Nuptse and Lhotse’s latest adventure showcases the history, culture, and environment of the Yukon, Northwest Territories, and Nunavut."

Other titles by Jocey Asnong

Nuptse and Lhotse Go to the Prairies

Nuptse and Lhotse Go to the West Coast

Nuptse and Lhotse Go to Iceland