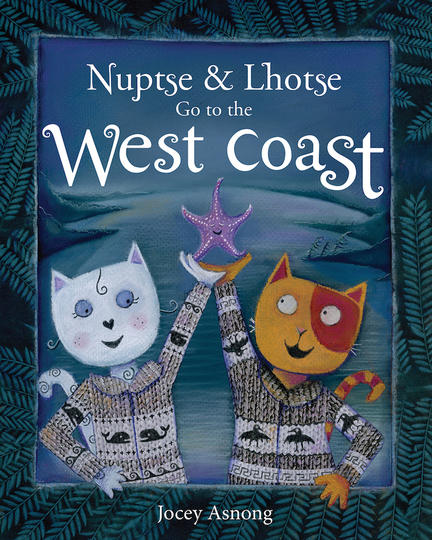 A colourful, imaginative story for adventurers of all ages that dream of falling asleep on a beach made of stars at the edge of the world.

Surf’s up and it’s time for another Nuptse and Lhotse adventure!

When the cats find Salish, a Purple Ochre Starfish, in a puddle, Nuptse and Lhotse are determined to help Salish get back home. The trio will travel across mountains and orchards, explore a coastal city’s many attractions, take an extraordinary ferry ride along the bottom of the Salish Sea, hike through the tangled rainforests of the West Coast Trail and surf the great waves at Long Beach. As they make their way back to the beach where the sun falls asleep into the sea every night, Nuptse, Lhotse and Salish meet many marvellous sea animals of the Pacific Northwest including whales, otters, crabs and even an octopus. Yet Salish and the cats notice that wherever they go, almost all of the starfish have mysteriously disappeared! Where could everyone be? The only one that can help them solve this starfish puzzle is Kermode the Great Spirit Bear. In a land where forests eat fish, the trees have faces and wolves swim like mermaids, will Nuptse and Lhotse and their new West Coast friends ever solve the mystery of all the missing starfish?

Jocey Asnong was raised by a pack of wild pencil crayons in a house made out of paper and stories. After finishing several years of illustration school at Sheridan College, she left the land of maple trees in Ontario and moved to the mountains of Alberta so she could wear mittens most of the year. When she is not chasing her cats around her art cave in Canmore, she might be caught in a blizzard near Mount Everest, or running away from wolf dogs in Mongolia, or peeking out castle windows in Scotland, or sleeping under the stars in Bolivia. Jocey’s illustrations can be found in all kinds of unusual places, as well as in the picture books Mushkid, The Princess and the Cheese, Nuptse and Lhotse in Nepal (winner of a Purple Dragonfly Award), Nuptse and Lhotse Go To the Rockies (RMB, 2014), Nuptse and Lhotse Go to Iceland (RMB, 2015), Rocky Mountain ABCs (RMB, 2016) and Rocky Mountain 123s (RMB, 2017). She lives in Canmore, Alberta.

"Colourful and jam packed with whimsy..."

Other titles by Jocey Asnong

Nuptse and Lhotse Go to the Prairies

Nuptse and Lhotse in the Land of the Midnight Sun

Nuptse and Lhotse Go to Iceland