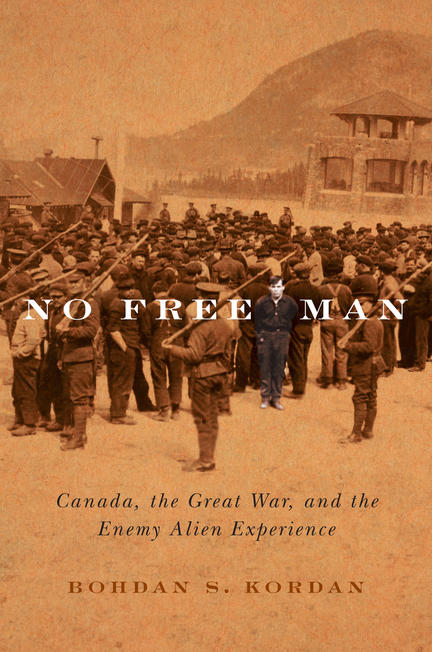 Approximately 8,000 Canadian civilians were imprisoned during the First World War because of their ethnic ties to Germany, Austria-Hungary, and other enemy nations. Although not as well-known as the later internments of Japanese Canadians during the Second World War, these incarcerations played a crucial role in shaping debates about Canadian citizenship, diversity, and loyalty.

Tracing the evolution and consequences of Canadian government policy towards immigrants of enemy nationality, No Free Man is a nuanced work that acknowledges both the challenges faced by the Government of Canada as well as the experiences of internees and their families. Bohdan Kordan gives particular attention to the ways in which the political and legal status of enemy subjects configured the policy and practice of internment and how this process – magnified by the challenges of the war – affected the broader concerns of public order and national security. Placing the issue of internment within the wider context of community and belonging, Kordan further delves into the ways that wartime turbulence and anxieties shaped public attitudes towards the treatment of enemy aliens. He concludes that Canada’s leadership failed to protect immigrants of enemy origin during a period of intense suspicion, conflict, and crisis.

Framed by questions about government rights, responsibilities, and obligations, and based on extensive archival research, No Free Man provides a systematic and thoughtful account of Canadian government policy towards enemy aliens during the First World War.

Bohdan S. Kordan is professor of political studies and director of the Prairie Centre for the Study of Ukrainian Heritage at St Thomas More College, University of Saskatchewan, and author of Enemy Aliens, Prisoners of War: Internment in Canada during the Great War.

Other titles by Bohdan S. Kordan

Canada and the Ukrainian Crisis

Canada-Ukraine Relations from Independence to the Euromaidan

A Bare and Impolitic Right

Internment in Canada during the Great War