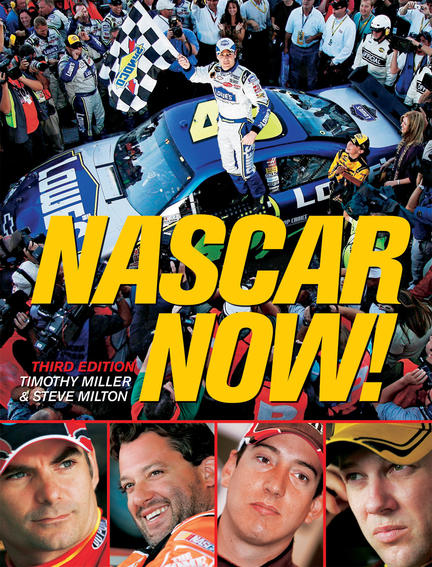 NASCAR Now! is the ultimate guide to the sport -- a high-octane ride from auto racing's humble roots to the present. This superb book for fans is like riding shotgun with the top 31 drivers on the Sprint Cup circuit, including Jimmie Johnson, Jeff Gordon, Kyle Busch, Tony Stewart, Matt Kenseth and Clint Boyer. Readers will go into the garage with top teams and they'll get behind the wheel with former racecar driver Brett Bodine and Tonight Show host Jay Leno as they pilot the official pace car.

Every aspect of NASCAR racing is covered in this photo-packed, fast-paced book, which includes:

NASCAR Now! is an informative, entertaining and action-packed guide that puts the reader in the driver seat.

by Timothy Miller and Steve Milton

[Review of earlier edition:] In short, everything you need to know.

[Review of earlier edition:] A complete, up-to-the minute introduction to NASCAR for new fans as well as keepsake for dedicated fans.

[Review of earlier edition:] Pit stops, blurring speed and top drivers are the focus of this collection of 175 color photographs.

[Review of 1st-edition:] Colorful volume with more than 200 photographs... ideal for new fans to NASCAR in that it explains all the safety features, the pit stop procedures, official's flags and NASCAR rules and examines the 23 venues in detail.

[Review of earlier edition:] Can help you understand how this sport has grown... If you're interested in stock car racing, there's plenty of information in this book.

[1st-edition:] American Library Association Book Pick for 2005: selected as one of a Quick Pick for Reluctant Young Adult Readers.

[Review of earlier edition:] Captures the daring sport with vivid descriptions of the cars and drivers and 150 color action photos.

[Review of earlier edition:] NASCAR Now is the must-have "players' guide." The book combines action photographs with descriptive dialogue geared towards the newest fans, but it is not too simple for aficionados.

[Review of earlier edition:] An in-depth look... From the sport's early days, racing on sand at Daytona to the present, on tracks like Lowe's Motor Speedway, no stone is left unturned.

[Review of earlier edition:] This colorful book has something for everyone interested in automobiles and racing... For this reviewer who loves racing but has not watched for many years, this book was a terrific re-entry into the sport... Photo, photos, photos. The chapters are short and easy to understand.

[Review of earlier edition:] Ideal for the new fans of NASCAR in that it explains all the safety features, the pit shop procedures, official's flags and NASCAR rules, and examines the 23-venues in detail.

[Review of earlier edition:] It's terrific... everything you ever wanted to know about NASCAR is in this book and the photos are terrific, too.

Other titles by Timothy Miller