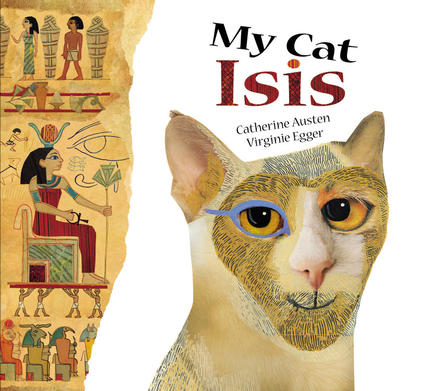 Striking collage illustrations bring to life a boy's comparisons of his beloved cat to Isis, goddess of Egyptian myth.

The goddess Isis was the revered daughter of the earth and sky. The cat Isis is a family pet who is just as special.

This dazzling work of paper- and photo-collage, painting and pen-and-ink illustration is both an homage to a beloved feline and a journey into the realm of Ancient Egyptian myth and the goddess Isis. Through a series of lighthearted comparisons between his cat and its goddess namesake, the boy narrator reveals both similarities and differences between the two worlds. An ideal book for pet lovers and lovers of ancient history alike!

Catherine Austen was raised in Kingston, Ontario, the youngest of five children. She studied political science at Queen's University and environmental studies at York University. While procrastinating in the face of exams, she wrote several short stories for literary journals. She worked through the 1990s in Canada's conservation movement, campaigning for federal endangered species legislation. In 2000, Catherine quit office life to raise her children and work as a freelance writer for environmental organizations and First Nations. While procrastinating in the face of deadlines, she began writing children's fiction. Catherine writes from her home in Quebec, which she shares with her husband, Geoff, and their children, Sawyer and Daimon.

Kids intrigued by ancient Egypt and cats will appreciate the narrator's evident love for both topics.

Who has never marvelled at the affinity between a goddess and a feline friend? My Cat Isis takes a loving look at the similarities and differences between an ancient Egyptian divinity and a boy’s cat. The story is a back and forth dialogue between mythology and the main character’s observations about his pet.

There is also a subtle humour in both the text and artwork. In one spread, Isis (the deity) does not chase birds at the feeder like her animal counterpart, but rather she “protects the seeds.” The goddess and her feline namesake cautiously regard each other across pages, a humorous visual reflection of the relationship between them.

The parallelism, however, is occasionally forced and the distinct differentiation between the two different styles of language may pose some difficulty for younger audiences. “My Isis bosses everyone around, especially the dog,” has a simplicity and a tone younger children would enjoy but, when it is juxtaposed with “At the height of her popularity, Isis was adored as the supreme protector of the ancient world,” parts of the book may be less accessible.

However, Austen very aptly conveys both information about Egyptian mythology and a depiction of the simple but complete relationship between the boy and his pet. As he says, “I love my Isis because she is my cat.”

This book would be a particularly useful classroom resource for ancient civilizations units and is recommended for children aged five to eight.

This dazzling work of collage illustrations is both an homage to a beloved feline and a journey into the realm of Ancient Egyptian mythology. Through a series of comparisons between his cat and its Egyptian goddess namesake, a boy reveals interesting similarities and differences. An ideal book for both pet lovers and fans of ancient history.

Other titles by Catherine Austen

28 Tricks for a Fearless Grade 6