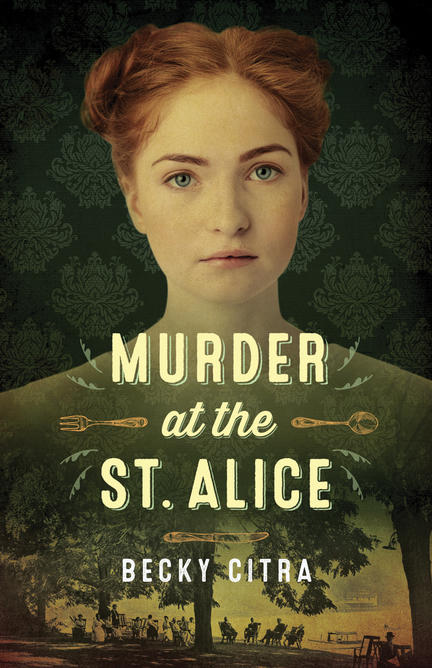 Murder, mayhem, mystery: the St. Alice hotel is shaping up to be more than a summer job for Charlotte.

It's 1908, and 16-year-old Charlotte O'Dell is forced to move away from her great Aunt Ginny in Victoria, and live and work at the St. Alice Hotel in order to make enough money to finish school. Her unruly red hair instantly makes her a new friend in Lizzie, though her equally fiery temperament doesn't go over quite as well with her boss, Mrs. Bannerman. It does, however, give her the opportunity to get to know the rest of the staff, and the guests, at the St. Alice.

Between organizing a women's march in support of the suffragettes, and memorizing all there was to know about her new profession in The Up-to-Date Waitress, Charlotte befriends one of the hot springs regulars, Mr. Doyle, and quickly learns about his tumultuous past with a boy he saw as a son, Henry. Determined to fix their relationship, she is ecstatic when all seems forgiven with a reunion at the St. Alice until she goes to brew her daily healing tea for Mr Doyle... and finds him dead.

Who killed Doyle? Was it Henry, reeling from lingering resentment over Mr. Doyle's supposed betrayal of his mother? Colonel Mitterand? He fought in the Boer War alongside Doyle and discovers a secret romance he cannot fathom. Or is it Charlotte herself? The police seem to think so; after all, she's the one they arrested...

Becky Citra has once again crafted an incredibly intricate web of mysteries and intrigue, and when all of the pieces are unravelled, who will remain standing?

Becky Citra is the author of over twenty books for children, ranging from early chapter books to novels for young adults. She was an elementary schoolteacher for over twenty-five years and began writing for children in 1995. Becky’s books have been shortlisted for and won many awards, including the Red Cedar Award, the Diamond Willow, the Silver Birch and the Sheila A. Egoff Children’s Literature Prize. She lives in Bridge Lake, British Columbia. For more information, visit www.beckycitra.com.

Other titles by Becky Citra

Griffin of Darkwood, The