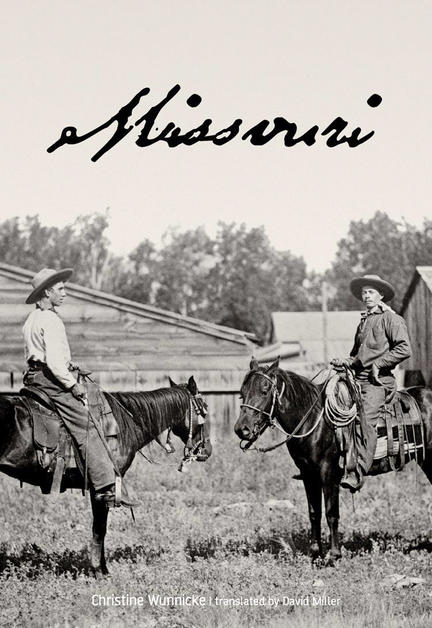 Written in the language of the period, this vivid and utterly transfixing love story between two men is set in the nineteenth-century American Midwest. Douglas Fortescue is a successful poet in England who flees the country for America following an Oscar Wilde-like scandal insinuating sexual impropriety; Joshua Jenkyns is a feral young outlaw who was taught how to shoot a man at age six, and who, against the wishes of his father, teaches himself how to read, a skill that then unleashes a world of possibility beyond that which he knows. The two men meet when Joshua robs Douglas's carriage and takes him hostage; soon, a remarkable secret is revealed, and these two very different men grow closer, even as Douglas's brother tries to "save" him from his uncivilized surroundings.

Missouri was first published in Germany to wide acclaim. Now available in English for the first time, Missouri is destined to become a gay men's camp classic for its earnest, romantic reinterpretation of a time and place in American history traditionally closed off to gay readers.

Christine Wunnicke lives in Munich, Germany. She has published four award-winning novels, a biography, translations, as well as both documentary and literary radio programmes. Missouri, first published in Germany in 2006, is her first book available in English.

The year is 1832 and young poet Douglas Fortescue is the talk of literary London. Across the Atlantic, Joshua Jenkyns has just committed his first murder at the age of six and has retrieved from his victim's coat pocket a copy of the collected works of Byron. This stark novella tells the tale of how their fates become intertwined. Why such a story should come from a German writer is anybody's guess but Wunnicke's imagined American west is as brutal a place as anything Larry McMurtry or Jim Jarmusch has ever created. The drama and singularity of these two characters take the reader to some unusual places and the book is a passionate tribute to the power of words.
?Sydney Morning Herald (Sydney, Australia)

We loved it. With surprises around each turn of the plot, this beautiful love story shows two totally opposite and very memorable characters who grow more and more alike throughout their relationship. Chosen as one of the GLBTRT Over the Rainbow Project Top Eleven for 2011, Missouri will no doubt become another classic like Brokeback Mountain. -American Library Association GLBT Round Table

ALA GLBT Round Table

Douglas Fortescue is a vaunted British poet and aesthete forced to flee to mid-1800s America with his brother after an Oscar Wildean scandal; orphaned Joshua Jenkyns is a wild-lad outlaw terrorizing the Midwest while carrying in his saddlebags Fortescue's collections of poetry - enigmatic words that speak to the boy's unarticulated sexual longings. Wunnicke's depiction of their doomed love, beautifully bleak and emotionally astute, is a most uncommon gay romance.
?Richard Labonte, Book Marks

Beautifully translated.... The usual point of comparison with prose featuring cowboys is Brokeback Mountain, but Missouri is not really anything like the now infamous Annie Proulx story. Wunnicke's writing is just enough; each segment of her novel is sublimely considered and executed.
?Attitude

What follows is a love story, but without a lot of the romantic trappings common to the genre; in particular, the two fellows' struggles with head lice are less romantic than comic, gross and ultimately very historically accurate. It may take a European to fully deconstruct the myth of lighting out for the West to find freedom, and this novel makes a good case for Wunnicke as that writer.
?Sacramento News & Review

Missouri is grand in its landscapes and romance. Plus, Wunnicke has come up with a queer pair of lovers who might make you quit Jack Twist and Ennis Del Mar.
?Uptown (Winnipeg)

AWOL on the Appalachian Trail

Witness to a City