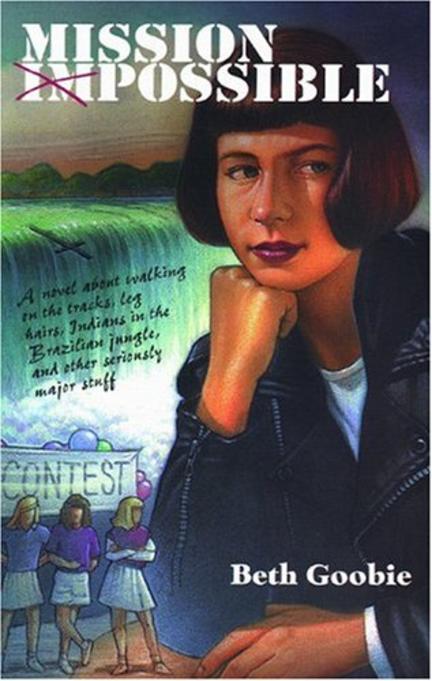 Jill Gilbert doesn't like the high school Lovely Legs Contest. For one thing, it's sponsored by the football team headed by her brother. For another, the school newspaper she writes for came up with the idea. But more important, it boils her blood that guys like her brother make so many assumptions about what girls like.

Mission Impossible is a tough sensitive teen novel. Jill, the narrator, is wickedly funny and heartbreakingly honest as she wrestles with sexism in her school and demons in her head. She comes close to going over the edge in more ways than one but triumphs in a way she could never have predicted. Right now, though, she's stuck in a jungle of tangled thoughts and leg hairs on what seems like an impossible mission.

In high school Beth Goobie studied and taught piano, wrote stories, and was the recipient of academic and citizenship awards. She worked for a year as a nanny in Holland, then moved to Winnipeg where she studied English literature at the University of Winnipeg (receiving the gold medal) and religious studies at the Mennonite Brethren Bible College. She has worked for many years with physically and sexually abused children and is concerned with issues surrounding the anger and powerlessness of those under legal age. Addressing these issues in her writing, she has published several novels for young adults, including Born Ugly, Mission Impossible, The Lottery and Before Wings, as well as poems and short stories for an adult audience in anthologies and magazines such as Fiddlehead, Malahat Review and Quarry. She lives in Saskatoon, Saskatchewan.

"Tough yet sensitive; it speaks to serious young women with questioning minds."
— Kliatt

"Jill articulates the feelings and fears of young women in a way that even the most macho football captain would find difficult to ignore."
--"Calgary Herald

"This is an intelligent book. . . . Promote Mission Impossible, hand it out, and read it yourself. It'll make the incredible tensions of the world of high school much more comprehensible."
— Quill & Quire, Starred Review

Other titles by Beth Goobie

The First Principles of Dreaming