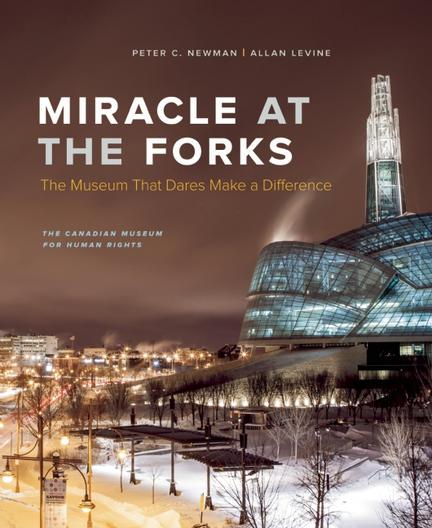 "The engaging story of the making of Canada's fifth national museum - a beautifully designed homage to Izzy Asper's dream of making a difference" It was on July 18, 2000 that Israel (Izzy) Asper, the renowned Canadian businessman and philanthropist, first discussed his idea of building a human rights centre in Winnipeg. He wanted to build a museum that would make a difference; that would help educate visitors to the museum about human rights issues, all with the aim of making the world a better, more humane place. He shared this vision with Moses (Moe) Levy, the Executive Director of the Asper Foundation, and gave Levy the mandate tomake the museum happen.

Miracle at the Forks recounts the fourteen-year ordeal of making Izzy Asper?'s dream a reality. It recounts the financial and political challenges of building a world class museum in Winnipeg, an objective that was made all the more difficult by Asper?'s death not six months after the public unveiling of plans for a national museum at The Forks on April 17, 2003. It is a story of passion and sheer will, about Moe Levy'?s determination to see Asper'?s grand idea come true, of Gail Asper'?s fortitude and unflagging drive to make sure her father'?s most cherished project became real, and of the countless others who lobbied, donated money, volunteered time, and fought to make the museum happen.

Written by acclaimed non-fiction writers, Peter C. Newman and Allan Levine, Miracle at the Forks also tells the story of the building of the museum itself, of the international competition to find an architect to design the building, and of Antoine Predock, one of the finest architects in the world who dared build a museum that is as remarkable in its construct as Izzy Asper?'s dream was in its audacity. Filled with full colour photography and exquisitely designed, this book will mark the official opening of The Canadian Museum for Human Rights on September 20, 2014.

Allan Levine is an award-winning author and historian who has written thirteen books, including King (Douglas & McIntyre, 2011), the critically acclaimed biography of Mackenzie King that won the Alexander Kennedy Isbister Award for Non-Fiction. He is a historical consultant on the documentary Jewish Partisans, currently under production by Emmy-winning documentary filmmaker Julia Mintz. A versatile author who moves easily between popular non-fiction and fiction, Levine has written four historical mysteries. His first mystery, The Blood Libel, won the Margaret McWilliams Award for historical fiction and was nominated for the Chapters/Books in Canada First Novel Award and the Arthur Ellis Award for Best First Novel. He lives in Winnipeg, MB.

Other titles by Allan Levine

Evil of the Age

Biography of a City

Who Was Canada’s Best Prime Minister?

William Lyon Mackenzie King: A Life Guided by the Hand of Destiny

Fugitives of the Forest

The Prime Ministers and the Media