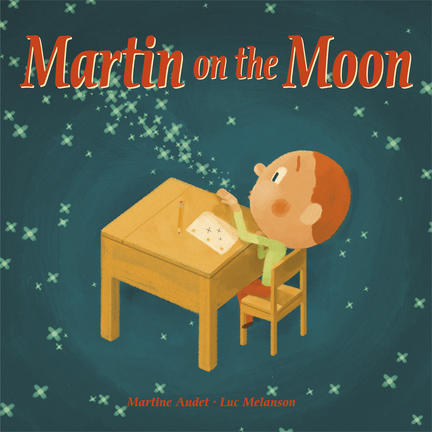 An active daydreamer, Martin can't help his mind from wandering on the first day of school. His teacher's waving arms remind him of the seagulls that fly along the river banks, which reminds him of a summer trip he took with his mother, which reminds him of a poem he wrote, which reminds him... When his teacher gently calls him back to Earth, Martin is embarrassed about his inattention. But when his whole class laughs along with him, Martin happily realizes that his imagination can help him make friends and have fun at school. The spirit of this whimsical story comes alive through the pairing of inquisitive and unexpected words and simple yet surreal illustrations. Nominated for the Prix TD de littérature canadienne pour l'enfance et la jeunesse in its original French, Martin on the Moon explores the poetry, beauty, and possibility of the first day of school.

Martine Audet is the author of many award-winning works of poetry, which have been translated into several languages, including English, Czech, German, Italian, and Spanish. She lives in Montreal.

Luc Melanson won the Governor General’s Award (Illustration) for The Grand Journey of Mr. Man by Gilles Tibo, and he was a finalist for the Governor General’s Award (Illustration) for My Great Big Mamma by Olivier Ka, Les Compositeurs by Claudio Ricignuolo and La petite Kim by Kim Yaroshevskaya. He has illustrated many books, including Book of Big Brothers by Cary Fagan, and Pink by Nan Gregory, both finalists for the Amelia Frances Howard-Gibbon Illustrator’s Award. Pink was a finalist for the Marilyn Baillie Picture Book Award and the Christie Harris Illustrated Children’s Literature Prize. Luc lives in Laval, Quebec.

"A valuable tool to help adults understand how children learn, and to share with little ones the importance of occasional flights of the imagination."

"...has a lovely poetic quality as Martin makes it through his first day of school."

"A compassionate, refreshing take on the common theme of "first day" jitters."

"The first day of school is many things, but one of the most poignant is the painful longing for the freedom of the days just past, and...in Martin on the Moon we feel that twinge of nostalgia for times past as well as the promise of good days ahead."

"No classroom clichés here. Rather, creativity and inspired teaching in full bloom."

"This quiet story is suited for times of reflection...a suitable additional purchase."

"An adorable story that the entire family will love."

"Amid the crowd of picture books that depict a child's first day of school, Martin on the Moon stands out as a beautiful, whimsical, and unconventional offering...One of the loveliest aspects of the text is how it quietly but persistently affirms the importance of children's exploration, wonder, and excitement."

"Martine Audet creates a curious hero and a classroom environment where he can flourish, and Melanson's visual mix of the literal and the symbolic is spot-on for early elementary students."

Martine Audet’s words, translated by Sarah Quinn, lead us through the poetry in Martin’s mind until the teacher calls, “Where are you, Martin? On the moon?” Martin learns that sharing his imagination is an important way of reaching out and an exciting way to make new friends.

In reading Martin on the Moon, young readers aged four to eight will experience first-hand how poetry can “paint pictures in your mind and make music in your heart” and how imagination can bring new friends together.

An active daydreamer, Martin can’t help his mind from wandering during class. When his teacher calls him back to Earth, Martin is embarrassed about his inattention. But when his whole class laughs along with him, Martin realizes that his imagination can help him make friends and have fun at school. This title is also available in French as Xavier-la-lune.

Other titles by Martine Audet

Other titles by Luc Melanson

Other titles by Sarah Quinn

A Little World for You to Build

Books for a New School Year