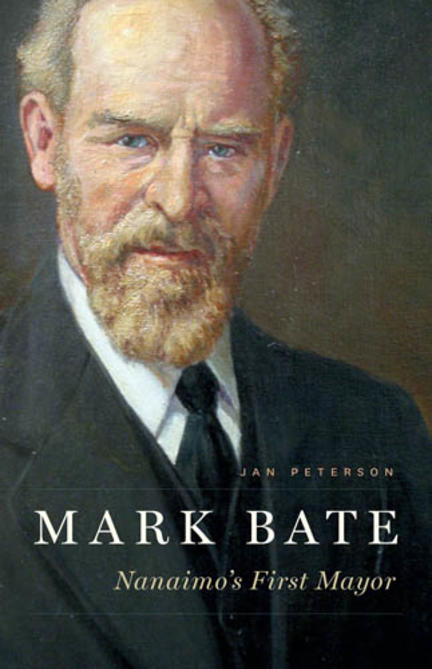 An insightful look at the first mayor of Nanaimo, BC, drawing heavily on his prolific and insightful written observations.

Mark Bate, elected Nanaimo’s first mayor in 1875, was a renaissance man. He loved music, writing, literature, the outdoors, community affairs, and of course politics. Bate served as mayor for sixteen terms—most by acclamation. He retired three times, returning to office after being persuaded to serve again.

Historian Jan Peterson skillfully weaves Bate’s own writing—including personal letters, business correspondence, and speeches—into the rich tapestry of nineteenth-century Nanaimo to create a three-dimensional portrait of a truly fascinating man. Bates witnessed and documented Nanaimo’s evolution from mining settlement to incorporated municipality to bona fide city. Mark Bate: Nanaimo’s First Mayor is a must-read for anyone interested in the history of this region and the settlers who helped to shape its communities.

Born and educated in Scotland, Jan Peterson immigrated with her family to Kingston, Ontario, in 1957. In 1972, she moved with her husband, Ray, and their three children to Port Alberni. With a lifelong interest in painting, writing, and history, she is recognized for her many years of involvement in the arts and community service. As a reporter for the Alberni Valley Times, she won a Jack Wasserman Award for investigative journalism. Jan and Ray retired to Nanaimo in 1996, where she continues to research and write. She is the author of nine previous books, including Hub City: Nanaimo 1886-1920 and Kilts on the Coast: The Scots Who Built BC.

“Jan Peterson has done an amazing job of shining a light on Nanaimo’s history — and with this book, her sixth on the city’s past, she has turned her attention to one of the most influential men of the 19th century.”

This well-researched biography draws on a wealth of archival documents, including original writings by Bate.

“Bate’s story, deftly told by local historian Jan Peterson, is in many respects the story of early Nanaimo. ... A well written and engaging popular history, this book is a very compelling companion to the author’s many other works on the history of Nanaimo and Vancouver Island.”

Other titles by Jan Peterson

More Than Just a Mill Town

Kilts on the Coast

The Scots Who Built BC

Journeys Down The Alberni Canal To Barkl