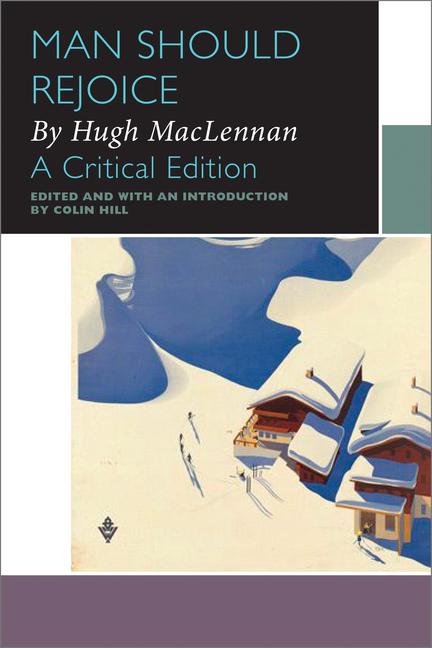 Man Should Rejoice is one of two hitherto unpublished novels by acclaimed novelist Hugh MacLennan. Completed in 1937 and left unpublished due to economic conditions during the Great Depression, it lay in the McGill archives until now.
This critical edition of Man Should Rejoice , which is also the first-ever publication of the work, is comprised of a critical introduction, a bibliography of published and unpublished sources, a fully-edited text based on a typescript of the novel, a list of textual emendations, and explanatory notes.
The introduction draws upon extensive research undertaken in three Canadian archival collections located in Montreal and Calgary. It provides relevant historical, cultural, and biographical context for the novel.
From hundreds of archival documents, Colin Hill reconstructs a textual history of the novel’s production that acknowledges the crucial contribution of Dorothy Duncan, who heavily revised the text and assisted MacLennan behind the scenes. Hill also explores the critical reception of MacLennan’s fiction from the 1930s to the present.
Published in English.

Colin Hill is Associate Professor at the Department of English, University of Toronto. His research focuses on modernist Canadian fiction. He is particularly interested in modernist archives, aesthetics, literary histories, and editorial practices, and is working on a book about modernism and Canadian cities. He is also editor of the University of Toronto Quarterly.

Like many better-known novels of its period from Canada and abroad, Man Should Rejoice exploits the dramatic potential inherent in the economic and social problems that arose in much of the world following the infamous Wall Street Crash of 1929.

Other titles by Colin Hill

Other titles by Hugh MacLennan

The Return of the Sphinx

The Story of a University

Watch that Ends the Night

The Watch that Ends the Night