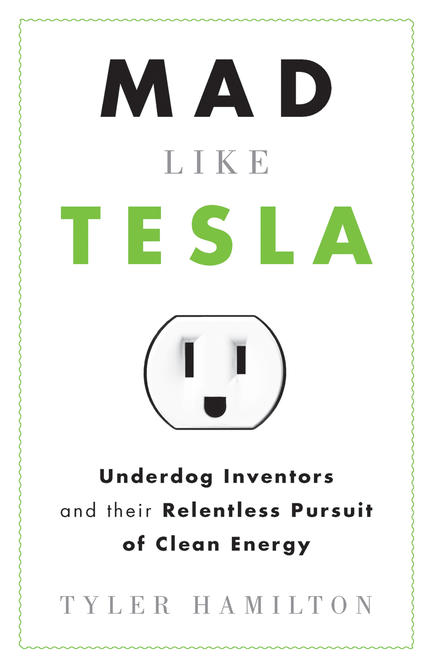 An “illuminating and important” look at the scientists, engineers, and entrepreneurs who are working to save us from catastrophic climate change (New York Journal of Books)

Climate change solutions so crazy they just might work!

A search for the contemporary Nikola Tesla — considered a mad scientist by his society for predicting global warming more than 100 years ago — fuels this analysis of climate issues, which introduces thinkers and inventors who are working to find possible ways out of the energy crisis.

From Louis Michaud, a retired refinery engineer who claims we can harness the energy of man-made tornadoes, to a professor and a businessman who are running a company that genetically modifies algae so it can secrete ethanol naturally, these individuals and their unorthodox methods are profiled through first-person interviews, exposing the social, economic, financial, and personal barriers that prevent them from making an impact with their ideas.

The existing state of green energy technologies, such as solar, wind, biofuels, smart grid, and energy storage, is also explored, creating a sense of hope against a backdrop of climate dread.

Tyler Hamilton is an author, adjunct professor, and award-winning energy and technology writer for the Toronto Star, where for five years he has been one of Canada’s leading voices on green technology issues and trends through his weekly column and associated blog, CleanBreak.ca.

I will never forget a private meeting I attended in Toronto on May 8, 2009, with British scientist James Lovelock, whose Gaia theory explains the Earth’s biosphere as a self-regulating entity quite capable of adapting to climate change. Humans, however, will be, in his view, a casualty of that adaptation. Commenting on the impact of climate change over the next few decades, Lovelock, two months shy of his 90th birthday, painted a shockingly grim picture. “Anything that overgrows its resources gets smacked back down,” he told us. “I foresee a loss of as much as 80 or 90 percent of the people on Earth by the end of the century. It’s a distinct possibility, and I don’t think there is much we can do to stop it. You have to make sure those who remain will be able to survive it.” I still recall looking around that room at a dozen or so people seized with despair as they listened to this otherwise lovable old man throw in the towel on behalf of humanity. Lovelock’s perspective may be extreme in its hopelessness, but you get the picture – we’re heading in the wrong direction on energy and need to change how we use it and where we get it.

Harvard University professor John Holdren, science and technology advisor to U.S. President Barack Obama and a former president of the American Association for the Advancement of Science, put it succinctly when he outlined the three choices we have in our faceoff against climate change: mitigation, adaptation, or suffering. “We’re going to do some of each,” he said. “The question is what the mix is going to be. The more mitigation we do, the less adaptation will be required and the less suffering there will be.” The need to reduce our reliance on fossil fuels, become more efficient in how we use energy, and increase our use of low-carbon technologies – the core part of any mitigation strategy – has sparked an era of energy innovation that even Nikola Tesla would find unimaginable. “Scientists, engineers, and entrepreneurs across the globe are responding with unprecedented innovation,” according to Christopher Flavin, president of the Worldwatch Institute, an energy and environmental think tank based out of Washington, D.C. “Overnight, the energy business has begun to resemble the it industry more than it does the energy industry of the past.”

Another motivating factor relates to energy security. There’s a growing recognition out there that the fossil fuels we have come to depend on to power our economies are going to become more expensive and, from a price perspective, more volatile. I don’t think we’ll ever run out of fossil fuels, even though they are non-renewable. That’s because the cost of finding and extracting and bringing them to market is only going one way: up. We’ll simply start using less and less as they lose their competitive edge over alternative energy sources or technologies that help us use energy more efficiently. Creating climate policies that put a meaningful price on carbon will only accelerate this transition. “It should be apparent by now that the future is not going to look like the present. It simply cannot,” wrote geoscientist J. David Hughes, who spent 32 years as a scientist with the Geological Survey of Canada. Take oil – the cheap, easy-to-drill stuff is running out, and increasingly we’re relying on the more expensive sources that are harder and more energy-intensive to extract, where they’re not kept off limits to exploration. With China, India, and other emerging economies jacking up demand for fossil fuels, our current situation is not sustainable. “The party’s coming to an end,” warned Hughes.

This battle against climate change and concern over the rising volatility of fossil fuel markets, together with projections that the world’s population will reach nine billion by 2050, have major economic implications. One, which British economist Nicholas Stern drew attention to in 2006, is the cost of inaction that under a worse-case scenario would amount to trillions of dollars of lost global gdp. The cost of action would be small by comparison, Stern concluded. The second economic implication relates to the new industries and technologies – and jobs – that will be created as we tackle these growing problems. Already, countries are jockeying for position to become global leaders in a new “green economy,” and clean technology is the world’s fastest growing investment segment. “The green economy is poised to be the mother of all markets, the economic investment opportunity of a lifetime, because it has become so fundamental,” Lois Quam, founder of strategic consulting firm Tysvar and former managing director of venture capital firm Piper Jaffray, told New York Times columnist Thomas Friedman. “To find an equivalent economic transformation, you have to go back to the Industrial Revolution.”

Clearly, there’s never been a greater need for new ideas and risk-taking, even in the presence of what may seem impossible or unlikely. Tesla, if he lived today and wasn’t trapped in a mental institution, would have been in his element. Does this “need” mean the transition to clean energy sources and technologies will come faster than past energy transitions? It remains to be seen. What is becoming evident is that the energy transition currently in play isn’t about moving from one dominant fuel or technology to another; it’s about moving from a handful of dominant sources to hundreds. “My strategy on energy technology is to build robustness, to build a portfolio,” says sdtc’s Whittaker. “Is there a single technology that’s going to save us? I wouldn’t count on it. It’s got to be a whole bunch of little things.” We like to think about silver bullets, but, to borrow what is perhaps an overused analogy, we should be thinking about silver buckshot – small projectiles moving together and capable of hitting a much wider target. And we don’t need to wait for new breakthroughs before we pull the trigger. Much can be accomplished over the next two decades by more aggressively deploying technologies we have today, including wind, co-generation, geothermal, solar- thermal power, solar photovoltaics, all-electric and hybrid-electric vehicles, second-generation biofuels, and ground-source heat pumps. (For context, discussion of some of these technologies is included in the chapters that follow.) Just as important are the policies needed to support their widespread deployment. “You need intelligent government regulations infinitely more than you need a massive effort to find breakthrough technologies,” says climate blogger Joseph Romm, who was acting assistant secretary of the U.S. Department of Energy during the Clinton administration.

I agree with Romm: the search for breakthroughs shouldn’t distract us from what we can and must accomplish now. At the same time, the hunt for true breakthroughs, as rare as they may be, is still necessary to sustain us over the long term. We need both leaps and incremental steps. The individual efforts profiled in this book may prove an “impossible waste of time.” They may lead to dead ends. Whatever the outcome, there is immense value in the journey. The left-behind morsels of innovations won’t necessarily go to waste. They can be picked up and used by others who embark on their own ambitious journeys. But there’s also a chance these efforts will lead to triumph. And perhaps years, but likely decades, from now we or our children will know, in hindsight, the degree to which these innovators’ labors improved our lives.

Interviewed for an article that appeared on August 22, 1937, in the New York Herald Tribune, Tesla – 81 years old at the time, less than six years before his death – looked back on his life and seemed quite satisfied that he had repeatedly proved his doubters wrong. “They laughed in 1896 … when I told them about cosmic rays. They jeered 35 years ago when I discovered the rotating field principle of alternating currents. They called me crazy when I predicted the radio. And when I sent the first impulse around the world, they said it couldn’t be done.”

They have often been wrong.

“It’s refreshing to read a book by a writer who knows his stuff, appreciates what he is looking at, and still has the positive enthusiasm of a little kid. Many science and technology writers could learn a lot from Tyler Hamilton.” — Cool Green Mag

“Mad Like Tesla is easy to get through, even for readers with only a basic knowledge of energy issues. Hamilton makes complex technologies comprehensible, and he clearly enjoys the remarkable human stories behind the science. Many of the risk takers and visionaries portrayed are Canadian (rocker Neil Young makes a cameo appearance!), but this book’s strong appeal should transcend all borders.” — Library Journal

“[A] vivid portrait … Hamilton isn’t interested in forecasting winners and losers as much as arguing that any and all efforts to develop new energy sources will boost the odds of ‘black swans’: unexpected events that ‘can blindside the optimists and the pessimists alike.’” — Publishers Weekly

“A real page-turner.” — The Conspiracy Show