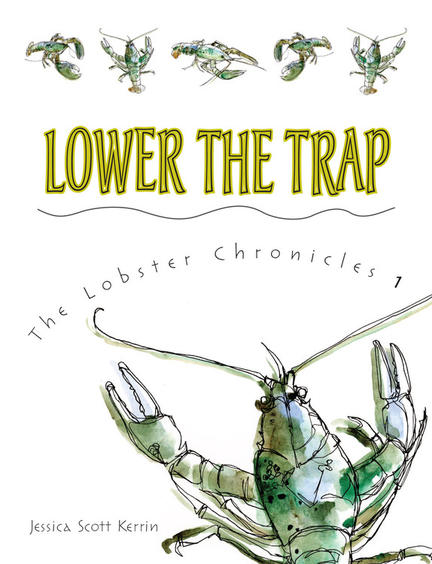 Graeme knows every inch of his fishing community. What's left for a future marine biologist to discover? But when Graeme's dad catches a gargantuan lobster with antennae the size of bicycle spokes, Graeme is fascinated. Graeme is even more excited when his dad promises to put the creature up for auction at the town's annual lobster festival and, if it gets the highest bid, use the prize money to take Graeme to a marine research aquarium. But what if the right thing would be to set the lobster free?

Lower the Trap is the first book in the Lobster Chronicles, a trilogy about what happens in a small coastal town when a giant lobster is caught. Each instalment describes the same events through a different boy's eyes, and the result is three suspenseful, believable stories and an engrossing reading experience.

Jessica Scott Kerrin is the author of The Things Owen Wrote, The Spotted Dog Last Seen (finalist for the Canadian Library Association Book of the Year for Children Award and the John Spray Mystery Award) and The Missing Dog Is Spotted. She is also the author of the picture book, The Better Tree Fort (illustrated by Qin Leng), and is known for the Lobster Chronicles series and the bestselling Martin Bridge series. Her novels have been translated into French, Turkish, Russian and Slovenian.

A cast of colorful characters and a satisfying ending will leave readers wondering whose story is next.

In Lower the Trap, Jessica Scott Kerrin, author of the Martin Bridge series, has given us the first in a trilogy in which each book is narrated by a different person. From the beginning, the reader identifies with Graeme Swinimer, a motivated lad who “Can’t wait!” to become a marine biologist, a dream supported by his respected fisherman father. Graeme records the scientific observations of his research and local exploration but he yearns to expand his inquiry beyond his immediate locale. An opportunity presents itself when his father catches a giant, ancient lobster, with “antennae like bicycle spokes,” similar to one caught in the bay years before.

Graeme is initially thrilled when his father decides to auction off the lobster to the highest bidder, promising to take Graeme to a research aquarium with the proceeds. Against his better judgment, he allies himself with manipulative Norris, son of the local cannery owner, who promises to persuade his father to increase his bid so Graeme can achieve his dream.

Graeme battles with his conscience, knowing that his educational opportunity spells certain doom for the lobster, which is neither ethically or ecologically correct. His efforts to suppress his scruples are only too human as are the petty retributions he inflicts on his sister who continually feeds his mummichogs inappropriate food!

Graeme wins our sympathy as doubts assail him, and we become deeply involved in his dilemma as he confronts it with genuine emotion and developing awareness. With a little help from others, including his arch-enemy Norris, Graeme rises above his own desires, putting the lobster’s survival above his own gratification.

Set in the fictional Nova Scotia village of Lower Narrow Spit, this thoughtful novel makes the reader aware of a lesser-known lifestyle. The story is much more a tale of internal conflict than an actionpacked adventure but, with its evocative descriptions of the sounds and sights of the sea, the realistic dialogue and the selection of believable characters, it is just as engrossing. It is a fast-paced read that would make an excellent read-aloud. While the reader is left with questions, all will be revealed in the second volume.

In this first book in The Lobster Chronicles, Graeme Swinimer hopes to become a marine biologist one day. When his father catches a gargantuan lobster, Graeme is thrilled. His father promises to auction off the lobster at the town’s annual lobster festival and use the money to take Graeme to a marine research aquarium. But is auctioning off the lobster the right thing to do?

Other titles by Jessica Scott Kerrin

The Missing Dog Is Spotted

Lobster Chronicles: A Trilogy, The