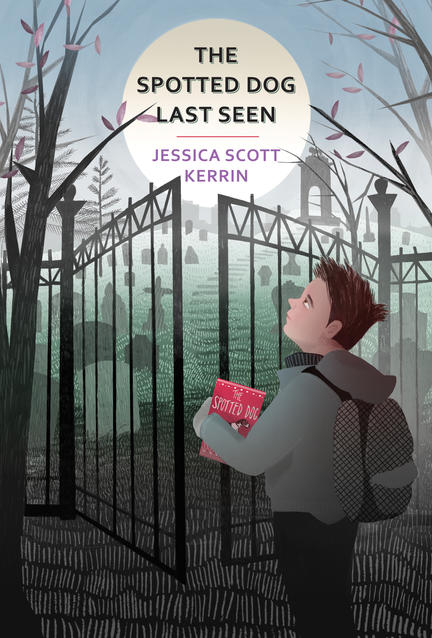 While tracking clues from a secret code penciled in the margins of mystery novels at a public library, Derek Knowles-Collier discovers a time capsule, an unpublished author and a gravestone that may finally put his haunting past to rest.

At Queensview Elementary, grade-six students are required to complete a community service unit as part of their school curriculum. Derek Knowles-Collier was sick when groups were assigned, so he is stuck with what's leftover: landscape and repair duty at the local cemetery.

Derek is not happy about his assignment. When he was very young, his friend Dennis was killed by a car after running into the road to catch a ball. Ever since, Derek has had recurring nightmares, and he is afraid that spending time in a cemetery will make it even harder for him to sleep through the night.

It's a relief, therefore, when his group's lessons on all aspects of cemetery care are so interesting and strange that Derek just doesn't have time to dwell on his experience with death. And when it rains, the lessons take place in the nearby public library, which takes him out of the cemetery altogether, at least for an afternoon.

One day, a book arrives at the library, an anonymous donation that happens every year. On reading the book, Derek and his group mates find a secret code written on an inside margin. One code leads to the next, with the last code leading the students to a time capsule.

Through a series of discoveries and deductions, Derek and his friends discover who has been sending books to the library every year. They also discover the truth behind Dennis's long-ago death, which means that Derek is finally able to put his terrifying memories (and his nightmares) to rest.

INCLUDES A SECRET CODE FOR READERS TO DECIPHER!

Jessica Scott Kerrin is the author of The Things Owen Wrote, The Spotted Dog Last Seen (finalist for the Canadian Library Association Book of the Year for Children Award and the John Spray Mystery Award) and The Missing Dog Is Spotted. She is also the author of the picture book, The Better Tree Fort (illustrated by Qin Leng), and is known for the Lobster Chronicles series and the bestselling Martin Bridge series. Her novels have been translated into French, Turkish, Russian and Slovenian.

Derek tells his own story, allowing readers to empathize with his fears and struggles as he comes to grips with them....Surprising twists and turns amid laughter and tears.

The author tells this story simply yet leads readers to several climatic sections with lots of twists and turns. This realistic fiction is well-written and well-developed.

Other titles by Jessica Scott Kerrin

The Missing Dog Is Spotted

Lobster Chronicles: A Trilogy, The