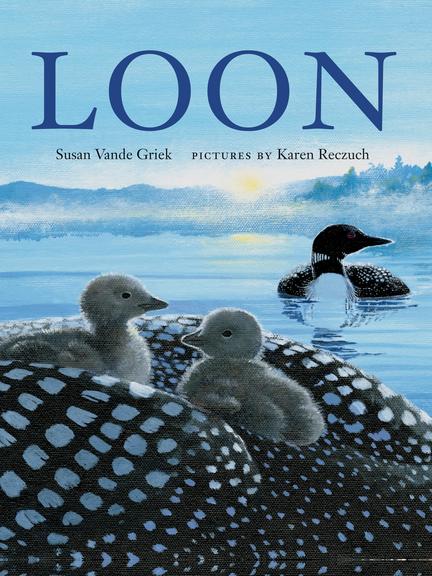 The haunting call of a loon is quintessential summertime for many people. These majestically beautiful birds breed on northern lakes during the spring and summer, and when fall arrives, they migrate to open coastal waters. Young loons stay on the ocean for three or four years until they mature and their gray feathers molt, turning to the beautiful black-and-white patterned feathers by which they are known. At this point they return to an inland lake to find a mate and have their young.

This gorgeously illustrated prose poem follows two baby chicks through this cycle. We witness their birth, and how they learn to swim, find food and avoid predators such as snapping turtles and big bass, and the possible danger of boaters. In the fall they imitate their parents as they learn to fly and are eventually large and strong enough to make their own migration to the coast.

An afterword supplies other interesting facts about the common loon, which some scientists believe has inhabited lakes and oceans for millions of years. It describes these birds' amazing diving ability, their four different calls, and the different factors that threaten them, such as loss of habitat due to human proximity and environmental problems (acid rain, deadly toxins in lakes, oil spills and global warming), suggesting different ways that we might help to protect them. Also included are suggestions for further reading and endpapers featuring illustrations of many other animals shown throughout the book that can be found in the loon's habitat.

Both the text and the illustrations have been carefully checked by an ornithologist for scientific accuracy.

Susan Vande Griek's simple, poetic text has been beautifully illustrated by Karen Reczuch, who received high praise for her work in award-winning Salmon Creek, a similar picture book focusing on the life cycle of an intriguing animal.

She divides her time between Halifax, Nova Scotia, and St. Andrews, New Brunswick.

This book...has a lyrical text and lush, full-color illustrations.

...a delightful celebration of nature...Highly Recommended.

Author Susan Vande Griek meshes intriguing facts about the common loon with rich poetic lighting . . . Karen Reczuch's acrylic artwork is bold and beautiful . . . Loon is a celebration of a not-so-common bird and the majestic wilderness it inhabits.

Other titles by Susan Vande Griek

And Other Poems of Birds in Flight

Morning on the Lake