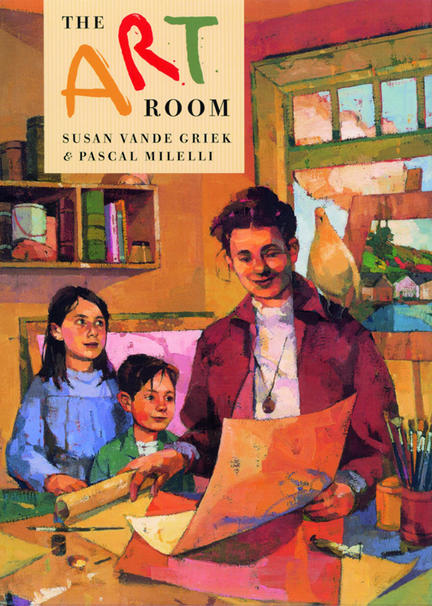 Emily Carr (1871-1945) was a great artist of the Northwest Coast. One of the few woman painters of her generation, she has been exhibited with and compared to Georgia O'Keeffe and Frida Kahlo, two other women artists whose work is finally receiving the recognition it deserves.

The Art Room is set in the early 1900s, when Carr was teaching art to children to support herself. Susan Vande Griek has created a delightful story-poem filled with Carr's love of animals, her insistence on painting from life and nature, and the sense of fun and freedom that she inspired in her students. Pascal Milelli has brilliantly accomplished the very difficult job of painting a book about a painter. His rich, painterly style is a perfect foil for the work that Carr was doing at the time.

She divides her time between Halifax, Nova Scotia, and St. Andrews, New Brunswick.

Pascal Milelli graduated from the Alberta College of Art and Design. His first picturebook was the award-winning Rainbow Bay (Raincoast), followed by The Art Room (Groundwood), which was awarded the Amelia Frances Howard-Gibbon Award for Illustration. His work has also been recognized by The Society of Illustrators and has appeared in Communication Arts and Applied Arts magazines. Pascal lives in Vancouver, British Columbia.

Other titles by Susan Vande Griek

And Other Poems of Birds in Flight

Other titles by Pascal Milelli

Waiting for the Owl's Call