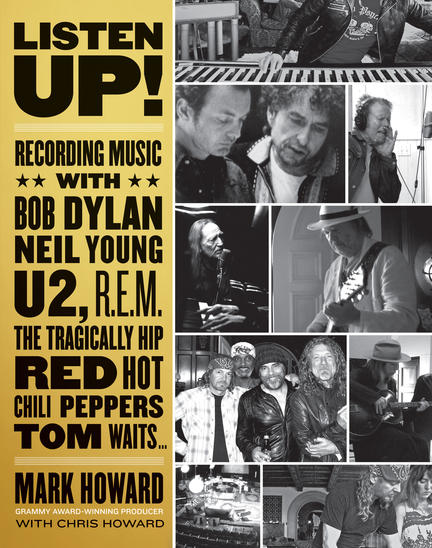 An album-by-album account of working with iconic artists such as Anthony Kiedis, Michael Stipe, Gord Downie, and Bono, from a leader in the field

Mark Howard, a record producer/engineer/mixer and a trailblazer in the industry, will take you through the star-studded world of recording and producing Grammy Award–winning artists. Listen Up! is an essential read for anyone interested in music and its making. Along with the inside stories, each chapter gives recording and producing information and tips with expert understanding of the equipment used in making the world’s most unforgettable records and explanations of the methods used to get the very best sound.

Listen Up! is both production guide and exclusive backstage pass into the lives of some of the planet’s most iconic musicians. Writing with his brother Chris Howard, Mark Howard provides a rare glimpse into the normally invisible, almost secretive side of the music story: that of the producer and recording engineer.

Born in Manchester, England, Mark Howard is a Canadian record producer, engineer, and mixer. He has worked with Neil Young, R.E.M., Willie Nelson, Peter Gabriel, U2, the Neville Brothers, Tom Waits, Lucinda Williams, Emmylou Harris, Marianne Faithfull, and the Tragically Hip, among many others. He currently lives in Burlington, Ontario. Chris Howard is an author and painter.

“This is one of those books readers can’t put down, and Howard has perfectly calculated the effect to linger after the last note has ended. This title, like much of Howard's recorded work, sets the perfect tone. Highly recommended for music lovers.” — Library Journal

“Howard’s insider music history will be of equal interest to music fans and those who sit behind the mixing board.” — Publishers Weekly

“Reading the lively and revealing new book Listen Up! by Grammy winning Canadian recording engineer and producer Mark Howard (with his author-painter brother Chris Howard), one is struck by the peculiar and particular needs of A-list artists while they make their records.” — Globe and Mail

“Mark Howard’s fascinating memoir pulls the curtain back to reveal the mysteries of how our finest songwriters — Bob Dylan, Neil Young, Lucinda Williams — create magic in the studio. Howard’s rebel-like recording style, his mastery of the ‘mental’ art of making music, and his vivid recollections of these enigmatic artists are revelatory for fans of real and authentic music, as well as required reading for any aspiring sound man. In Howard’s world, music making is a high-stakes game, as he dodges hellbent Mexican Federales, deadly scorpions, and equally volatile musicians.” — Austin Scaggs, contributing editor for Rolling Stone

“Mark Howard’s Listen Up! provides secret studio access from the ’80s to now, featuring some of the most creative and influential artists the music world has ever heard. Mark’s storytelling is straightforward and unflinching; we hear how things really went down in the studio with some of these quirky musicians. Chapters go into detail on the settings Mark created to work in, and into the technical process a bit, but the book never drags or slows down in documenting these creative endeavors and the results. It’s a must-read for studio professionals like me, and a rare, honest glimpse behind the recording studio’s curtain for the rest of you.” — Larry Crane, editor for Tape Op: The Creative Music Recording Magazine and engineer/producer

Other titles by Mark Howard

The Creative World of Mark Howard