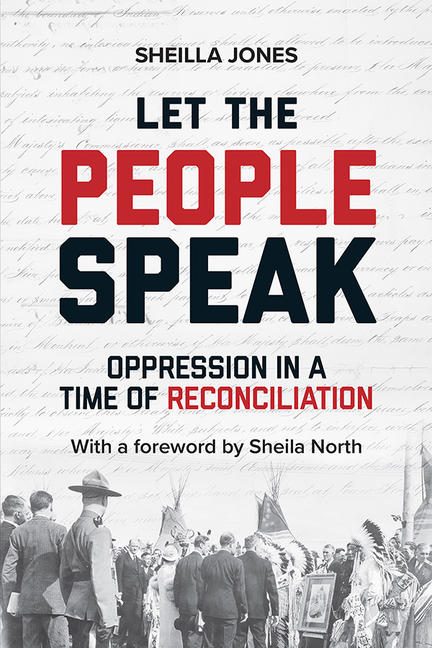 Over the past fifty years, Canada’s Indigenous Affairs department (now two departments with more than 30 federal co-delivery partners) has mushroomed into a “super-province” delivering birth-to-death programs and services to First Nations, Inuit and Métis people. This vast entity has jurisdictional reach over 90 percent of Canada’s landscape, and an annual budget of some $20 billion. Yet Indigenous people have no means to hold this “super-province” accountable to them. Not a single person in this entity has been elected by Indigenous people to represent their interests. Not one. When it comes to federal Indigenous policy, ordinary Indigenous people in Canada are voiceless and powerless. In Let the People Speak: Oppression in a time of reconciliation, author and journalist Sheilla Jones raises an important question: are the well-documented social inequities in Indigenous communities—high levels of poverty, suicide, incarceration, children in care, family violence—the symptoms of this long-standing, institutionalized powerlessness? If so, the solution lies in empowerment. And the means of empowerment is already embedded in the historic treaties. Jones argues that there can be meaningful reconciliation only when ordinary Indigenous Canadians are finally empowered to make their voices heard, and ordinary non-Indigenous Canadians can join with them to advance a shared future.

Sheilla Jones is a Senior Fellow with the Frontier Centre for Public Policy, leading the Treaty Annuity/Individual Empowerment Initiative. She has been researching Indigenous politics for more than 20 years, serving as a facilitator for the Treaty Annuity Working Group, a special committee of the Social Planning Council of Winnipeg, which focused on modernizing First Nations treaty annuities. Sheilla is an award-winning Canadian journalist and author of several books, including an examination of the troubled early years of the Manitoba Métis Federation, as well as books on cosmology and quantum physics. Sheilla has a deep settler history. Her European ancestors have been part of settling Canada since the 1600s. She lives in Winnipeg.

Excerpt: Let the People Speak: Opression in a Time of Reconciliation (by (author) Sheilla Jones)

Most ordinary Canadians (Indigenous and non-Indigenous) have little idea of just how powerful the Indigenous Affairs (IA) departments are within Canada’s national government. IA has jurisdictional reach over 90-percent of Canada’s landscape, as well as authorities that reach into every single federal department and agency. All of them. Splitting the department into Indigenous Services and Crown-Indigenous Relations does not change this power dynamic because it constitutes little more than putting some new labels on the same authorities. IA’s mandate it responsibility under the Indian Act of 1876 for managing the obligations in historic treaties and for negotiating modern treaties. The historic treaties, signed primarily in the 1800s and early 1900s, cover about 50 percent of Canada’s land mass. The modern treaties, signed after 1975, cover another 40 percent, primarily in the North. Only southern Quebec, a bit of Labrador and Newfoundland, and most of British Columbia remain outside IA’s mandate, with the exception of the portion of the 3-million hectares of reserve lands that lie outside the historic and modern treaty areas. The push by the federal government towards “self-government” agreements between First Nations and the Crown in Canada will have impacts across federal government departments and across the country once they are negotiated and signed. They will affect Canadians just about everywhere. Yet ordinary Canadians—Indigenous and non-Indigenous—are not involved in this process. Since the implementation of the Indian Act in 1876, the federal government has shown little interest in involving Canadian society in working out policies that have legal, social and economic implications for the relationship between Indigenous and non-Indigenous people. And now, self-government/modern treaty issues are going to get even more complicated. The relationship between Canada’s Indigenous and non-Indigenous people, according to the Prime Minister’s Office in August 2017, is supposed to undergo a dramatic shift as the Trudeau government moves to deliver on its explicit goal of “accelerating a move to self-government and self-determination of Indigenous Peoples”. This includes a suite of legislative changes that are intended to “de-colonize” the management of Indigenous issues and prepare the ground to eliminate the Indian Act. The move to “accelerated self-government” could see the potential creation of somewhere between forty and eighty new self-governing nations, all negotiated on behalf of Canada by the staff of the IA governance programs, under the new Crown-Indigenous Relations portfolio. But how much trust should ordinary Canadians—Indigenous and non-Indigenous—have in IA’s ability to effectively deliver on such vast and far-reaching negotiations? The lack of transparency around IA negotiations makes them vulnerable to suspicions about whether the people at the negotiating tables are acting in good faith. And it raises some legitimate questions about whose interests are really being served. We simply don’t know, and that’s a huge problem. In the aftermath of the surprise announcement in August 2017 that the Trudeau government was accelerating the move to self-governance as a means of reconciliation, former prime minister Paul Martin was adamant that whatever form of governance was going to be created, it had to be decided by Indigenous people themselves. “It starts with the inherent right to self-government,” Martin told CBC-Radio’s The House in September 2017. “Then what you begin to deal with is how are they going to effect it, how are they going to do it? And this has to be their decision. One of the first things FN will have to decide is if it is 614 communities or is it going to be 50 or 60 nations. All the decisions that have to be made in this area are theirs to make.” If ordinary Indigenous people have no political power and no political voice at the federal level, it stands to reason that they will most certainly not be the ones deciding anything about reconciliation through self-governance and modern treaties. It will be the federal Indigenous Affairs departments and the AROs and band representatives they fund that will be “negotiating” with each other. In fact, the push for negotiations for self-government will involve only one of the AROs, the Assembly of First Nations. The self-governance negotiations for Inuit people are largely signed off, complete with surrendering their rights to any further claims. And the Métis political leaders are focussing their energy on creating a Métis Nation that they will run. It is the future governance of nearly all the First Nations communities that is taking centre stage at the negotiation table, and there is no place at the table for the voices of ordinary Indigenous and non-Indigenous Canadians to be heard. We are at a crucial turning point in the evolution of the relationship between Indigenous and non-Indigenous Canadians, and the scope of the self-governance negotiations has the potential to impact the lives of people all across the country. It is not clear how a move towards reconciliation can happen when ordinary Indigenous and non-Indigenous people have no voice in advancing a shared future in Canada.

Other titles by Sheilla Jones

A Story of Passion, Tragedy, Ambition and Science