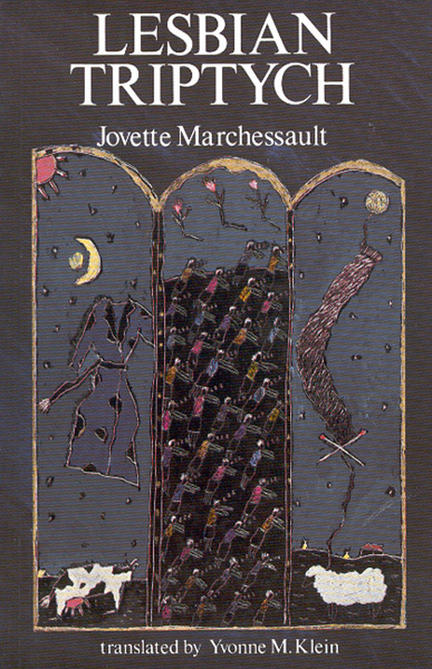 Jovette Marchessault's Lesbian Triptych is an anthology of three storeis - "Night Cows," "A Lesbian Chronicle from Medieval Quebec" and "The Angel Makers" - evoking the best of the new wave of feminist writing in Quebec. Sensuous and fabulous language turns conventional images of women inside out; Marchessault challenges us to remake our patterns of language in a way that explodes the stereotypes of the past and ecstatically explores the contours of a feminist vision for the future. Anglophone readers will find a new magic, new revelations, a new name of women's experience in the work of this Quebecoise word-spinner.

Jovette Marchessault
Born in Montreal, Quebec, Jovette Marchessault is a novelist, a playwright and a sculptor. She is the winner of the Prix France-Québec, the Grand Prix Littéraire Journal de Montréal, the Grand Prix Littéraire de la ville de Sherbrooke and the Governor General’s Award. Like a Child of the Earth (1988), The Magnificent Voyage of Emily Carr (1992), Mother of the Grass (1989), Saga of the Wet Hens (1983) and White Pebbles in the Dark Forests (1990) are available in English translation from Talonbooks.

Yvonne Klein is a retired college English professor and a professional translator and editor who reads an awful lot of crime fiction. She has translated all three volumes of Jovette Marchessault’s autobiographical trilogy, Like a Child of the Earth, Mother of the Grass and White Pebbles in the Dark Forests.

Other titles by Jovette Marchessault

The Magnificent Voyage of Emiy Carr

White Pebbles in the Dark Forests

Mother of the Grass

Saga of the Wet Hens

Other titles by Yvonne M. Klein

White Pebbles in the Dark Forests

Mother of the Grass