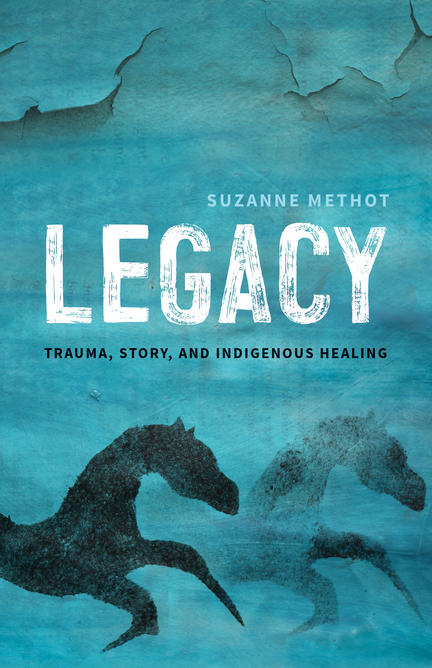 Winner of the 2019–20 Huguenot Society of Canada Award

“Powerful … A deeply empathetic and inspiring work with insights of value to anyone struggling to overcome personal or communal trauma.” — Library Journal

“[A] beautifully written book about strategies for healing from intergenerational trauma … In crystal-clear prose, Methot has written a book that is both easy to follow and crucial to read.” — LitHub

Five hundred years of colonization have taken an incalculable toll on the Indigenous peoples of the Americas: substance use disorders and shockingly high rates of depression, diabetes, and other chronic health conditions brought on by genocide and colonial control. With passionate logic and chillingly clear prose, author and educator Suzanne Methot uses history, human development, and her own and others’ stories to trace the roots of Indigenous cultural dislocation and community breakdown in an original and provocative examination of the long-term effects of colonization.

But all is not lost. Methot also shows how we can come back from this with Indigenous ways of knowing lighting the way.

Suzanne Methot is a Nehiyaw (Cree) writer, editor, educator, and community worker born in Vancouver, British Columbia, and raised in Peace River, Alberta. Her work has been published in anthologies including Steal My Rage: New Native Voices and Let the Drums Be Your Heart. She has worked in the non-profit sector, in the classroom, and in advocacy and direct-service positions in Indigenous community–based agencies. She is co-author of the textbook Aboriginal Beliefs, Values, and Aspirations, and she currently lives in Toronto, Ontario.

When a young man I know is stabbed and killed in a street fight in Toronto in 2016, there are no fewer than three memorial services: one at the local Friendship Centre, one at his workplace, and one on his mother’s reserve. A vigil is also held at the site of his death. News of his passing filters through the Indigenous community on Tuesday and Wednesday, and by Thursday, the first memorial is in progress. The events come together beautifully: drummers, elders, a PowerPoint photo slideshow, room rentals, social media invitations, a written program, a speaker’s list, gifts for the family, a basket of tobacco ties (cobbled together from at least three different urban organizations), platters of food, his favourite music piped into the auditorium, a guestbook, and people gathered to support the family and discuss This Thing That Has Happened.

I have lived in and worked for the Indigenous community in Ontario since 1992, and I can tell you: this kind of cooperation, positive energy, and amenability does not exist on an everyday basis.

If you don’t believe me, then believe the Aboriginal Healing Foundation (AHF). Between 1998 and 2014, the AHF — a non-profit organization managed by Indigenous peoples — conducted research and supported community-based healing initiatives across the country. These were meant to address the legacy of residential schools in Canada, including intergenerational impacts. According to the AHF, as a result of the physical, sexual, and psychological abuse suffered by those who attended residential schools, Indigenous peoples in Canada now lack the capacity to build and sustain healthy families and communities.

The AHF says psychological and emotional abuse in Indigenous communities is common. Rage and anger are widespread at all levels -- individual, family, and community. Indigenous peoples carry multiple layers of unresolved grief and loss, and they suffer chronic physical illness related to their emotional and spiritual states. Families, communities, and workplaces suffer from toxic communication patterns. The AHF says there is disunity and conflict among individuals, families, and factions within Indigenous communities. Indigenous people in positions of authority often misuse their power to control others. The social structures that hold families and communities together — trust, common ground, shared purpose and direction, a vibrant ceremonial and civic life, co-operative networks and associations — have broken down, with few working for a common good. Indigenous peoples fear personal growth, transformation, and healing.

In addition to the impacts listed above, the AHF has documented 22 additional impacts of intergenerational trauma that it says are contributing to dysfunction and negative outcomes in Indigenous communities. These findings have been corroborated by other organizations, including the National Collaborating Centre for Aboriginal Health, which released a 2015 report on the increased prevalence and root causes of depression among Indigenous peoples in Canada.

Indigenous peoples are more than victims, and they are not defined only by the traumatic events of colonization. As Cree student Billy-Ray Belcourt wrote in a blog post after being named the first First Nations Rhodes Scholar in 2015 (an achievement that was inevitably framed around Belcourt’s experiences with racism and the trauma of residential school), “Dear Media: I am more than just violence.” Despite the Indigenous desire to leave the past behind, however, the past doesn’t seem quite done with us.

This past–as–present reality is reflected in the lives of many Indigenous people in Canada, including the life of Robert Arthur Alexie. Alexie was chief of the Tetlit Gwich’in band council in Fort McPherson, Northwest Territories, and chief negotiator for the Gwich’in regional land claim in 1992. After serving his people in multiple roles, he was elected president of the Gwich’in Tribal Council in 2012. Alexie was also a musician, a photographer, and the author of two novels including the ground-breaking Porcupines and China Dolls, which deals with the impacts of the residential school system on Indigenous peoples. Alexie was knowledgeable, principled, and funny, and he made enduring contributions to his nation and to the country. And in 2014, at the age of 58, he was found at the side of the Dempster Highway in the Northwest Territories, dead from a self-inflicted gunshot wound. In a 2015 piece about Alexie’s contribution to Indigenous and Canadian literature, journalist Noah Richler surmised that Alexie’s “terrifying private demons” had finally caught up with him.

These demons are a persistent reality in the lives of all the Indigenous people I know and have known, affecting those on the fringes of society and those in positions of influence and authority. They exist in people who seem to be functioning just fine, thank you — the kind of people who are profiled in good–news media stories that seek to overturn common myths and stereotypes about Indigenous peoples and communities.

The young man whose death brought the Toronto community together in an all-too-familiar ritual of mourning was certainly a success story. He worked at a major cultural institution. He had graduated from high school, studied a trade at the college level, and was registered in another college program when he died. He had pursued his goals, even completing a course to overcome his fear of public speaking. He bicycled to and from work and was trying to quit smoking. He had a girlfriend and he was saving up so they could move out of her father’s house. He was well-liked and he wanted to work for his community. He did everything the student support workers at his high school and college said he should do. And he still died at age 20, stabbed in the neck and chest, after taking a bar fight outside.

Behind all our goals, our successes, and our attempts at success, there is a story. It is a story of terror, anger, grief, and loss. It is a story that still, after hundreds of years, determines Indigenous lives in Canada. The young man in Toronto carried this story, as all Indigenous peoples do. It is not the only story we tell — there are stories of happiness and achievement, too — but it is the one that sometimes seems to have the most influence. The time has come to understand this story, and the mechanisms of its transmission.

“Powerful … A deeply empathetic and inspiring work with insights of value to anyone struggling to overcome personal or communal trauma.” — Library Journal

“Legacy is a book that is sure to be found on classroom syllabuses in years to come. It offers Indigenous readers testimony and some tools, and provides non-Indigenous readers depth of scope for understanding the relationships that exist between Indigenous peoples, their nations, and Canada.” — Quill & Quire

“An important addition to the Indigenous library shelf.” — Booklist

“This book is accessible, relatable, and full of storytelling about real people. It deeply resonates with me as a traditional counsellor, educator, and Indigenous person. Suzanne Methot, a brave Nehiyaw writer and community helper, takes up the challenges of logically explaining a child’s traumatized brain and body and how these impacts continue into adulthood. Methot also explores Indigenous health-care models, proving that Indigenous values provide solutions. This book uncovers the critical need for legislation that moves from creating ‘a renewed relationship’ with Indigenous peoples to creating real structural change.” — Dr. Cyndy Baskin, Mi’kmaq Nation, Associate Professor, School of Social Work, Ryerson University

“[A] beautifully written book about strategies for healing from intergenerational trauma … In crystal-clear prose, Methot has written a book that is both easy to follow and crucial to read.” — LitHub