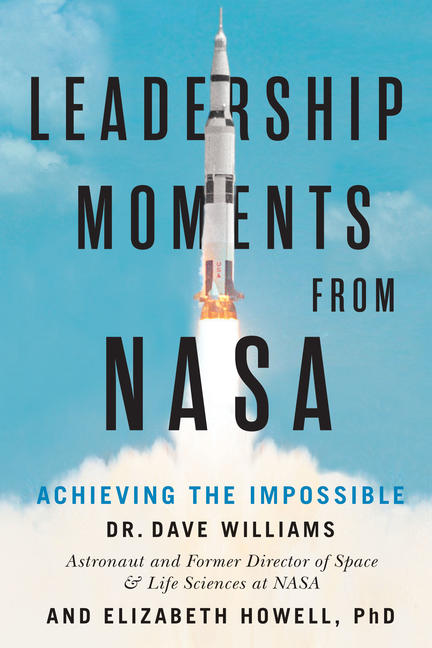 The NASA way: lessons on leadership, teamwork, and corporate culture. How does NASA take on seemingly insurmountable challenges, recover from tragedy and continue to attract the best and brightest talent?

Through the use of NASA oral histories and interviews, this book shows how NASA recovered from tragedy and adversity, and how it developed a culture of competency that continues to attract the best and brightest.

Dr. Dave Williams is an astronaut, aquanaut, jet pilot, ER doctor, scientist, and CEO. The former Director of Space & Life Sciences at NASA, he has flown to space twice, once on the space shuttle Columbia and once on Endeavor, logging over thirteen million kilometres in space and over seventeen hours of spacewalks. He has lived and worked on the world’s only undersea research habitat and is the recipient of five honourary degrees, the Order of Canada, and the Order of Ontario. Williams lives in Oakville with his wife, Cathy, two kids, Evan and Olivia, and nephew, Theo. Connect with him on Twitter @AstroDaveMD.

“Houston, Tranquility Base, the Eagle has landed.” July 20th, 1969 — a day that will stand forever in history. With the advent of television, more people were watching the NASA lunar landing than any other event in history. It had been eight years since President John F. Kennedy proclaimed that NASA would send humans to the Moon and return them safely to Earth before the end of the decade. “Not because it is easy, but because it is hard.” With that proclamation began one of the most incredible stories of leadership, teamwork and risk management in history. It takes courage and a relentless commitment to excellence to achieve the impossible. Even with today’s space exploration capabilities many wonder how NASA was able to accomplish seemingly impossible feat, successfully achieving Kennedy’s goal less than nine years later. It wasn’t easy.

Many who dreamt of exploring space believed that it would be impossible. The televised Mercury, Gemini and Apollo missions and the many articles in the LIFE and National Geographic magazines captured the imagination of the young and old. It was clear that there were risks associated with space exploration. In January 1967, the crew of Apollo 1 perished. Not in space but on the launchpad, in a fire lasting ninety seconds. The crew trapped inside the Apollo capsule had no chance for survival and NASA suffered the first loss of a spaceflight crew. When asked about risk in December 1966, Commander Gus Grissom responded, “You sort of have to put that out of your mind. There's always a possibility that you can have a catastrophic failure, of course; this can happen on any flight; it can happen on the last one as well as the first one. So, you just plan as best you can to take care of all these eventualities, and you get a well-trained crew and you go fly.” A month later he, Roger Chaffee and Ed White would perish in the tragic fire.

Space exploration is the story of people working together through triumph and tragedy. Gene Krantz, now famous as the lead flight director during Apollo 13, responded to the Apollo fire by calling a meeting of his staff in Mission Control three days after the accident. Not mincing words, he said “We were too ‘gung-ho’ about the schedule and we blocked out all of the problems we saw each day in our work. Every element of the program was in trouble and so were we.” With a steely gaze and crewcut, Kranz, an aerospace engineer and former fighter pilot, embodied the NASA culture. “From this day forward, Flight Control will be known by two words: Tough and Competent.” He said, looking each team member in the eye. “Tough means we are forever accountable for what we do or what we fail to do. We will never again compromise our responsibilities…. Competent means we will never take anything for granted…. Mission Control will be perfect. When you leave this meeting today you will go to your office and the first thing you will do there is to write Tough and Competent on your blackboards. It will never be erased. Each day when you enter the room, these words will remind you of the price paid by Grissom, White, and Chaffee. These words are the price of admission to the ranks of Mission Control.” The team left the meeting and refocused their efforts on the most significant achievement in history, sending humans to the Moon.

“This is a fascinating read, extracting leadership lessons from many people who were on the front lines at NASA. There is a lot of history here, and from that, one hopes, some guidance for the future.” — Mike Griffin, former NASA Administrator and Under Secretary of Defense for Research and Engineering

“Spaceflight is a demanding and unforgiving environment and flying humans in space takes tremendous leadership skills to be successful. This book is a must-have resource and guide for anyone studying and wanting to improve their leadership skills, even in fields outside of human spaceflight.” — Bill Gerstenmaier, Vice President of Mission Assurance at SpaceX

“The authors’ engaging narratives spark our imagination and open up so many possibilities we can explore as leaders. It’s a splendid read besides being so insightful as we continue our leadership journey.” — Diane Craig, CEO of Corporate Class Inc.

“A very compelling profile of the critical role of leadership in achieving the impossible, one that promises to inspire generations of future leaders.” — Anne Snowdon, professor and Academic Chair (WIN) at the Odette School of Business; Scientific Director and CEO of SCAN Health

“NASA teams motivated by extraordinary leaders have succeeded in overcoming unprecedented challenges to accomplish their mission. Leadership Moments captures the essence of these successful NASA leaders and tells their stories in an exciting, insightful and inspiring way.” — Joe Rothenberg, former NASA Associate Administrator for Space Flight

Other titles by Dave Williams

Why Am I Taller?

What Happens to an Astronaut's Body in Space

Lessons from the Edge of the Universe

Living on Other Planets

To Burp or Not to Burp

A Guide to Your Body in Space

Other titles by Elizabeth Howell

Why Am I Taller?

What Happens to an Astronaut's Body in Space