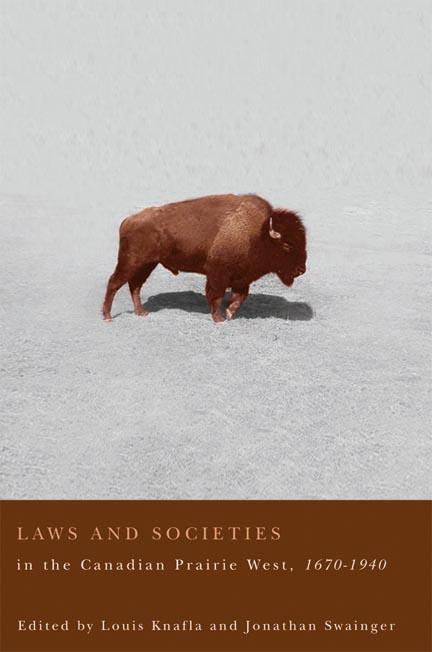 Challenging myths about a peaceful west and prairie exceptionalism, the book explores the substance of prairie legal history and the degree to which the region's mentality is rooted in the historical experience of distinctive prairie peoples. The ways in which prairie peoples perceived themselves and their relationships to a wider world were directly framed by notions of law and legal remedy shaped by the course and themes of prairie history. Legal history is not just about black letter law. It is also deeply concerned with the ways in which people affect and are affected by the law in their daily lives. By examining how central and important the law has been to individuals, communities, and societies in the Canadian Prairies, this book makes an original contribution.

Jonathan Swainger is Associate Professor of History at the University of Northern British Columbia and co-editor, with Constance Backhouse, of People and Place: Historical Influences on Legal Culture, also published by UBC Press.

Laws and Societies is a useful contribution to the sparse history of law and governance in Canada ... The editors challenge historians of western Canada to muse about the use of the law and legal documents in their projects. Hopefully, the collection will inspire future conferences, discussions, and monographs on the law and its application in western Canada and in Canada.

[UBC Press’ Law and Society Series], edited by W. Wesley Pue, is a prime example of the excellent scholarly work that is currently being conducted on the critical issues surrounding the interaction between law and society in Canada. The eleven essays in Laws and Societies in the Canadian Prairie West underscore the complexities of implementing the rule of law and administering “justice” in the sparsely settled and geographically vast area of Canada’s Prairie region. As Lou Knafla notes in the introductory chapter, the Prairies represent the “least developed” region in Canadian legal history (p.2). This volume makes a notable contribution to correcting this imbalance. As well as being a valuable source for Canadian legal and social historians, Laws and Societies in the Canadian Prairie West will prove to be beneficial to scholars outside of Canada who wish to gain a better understanding of some of this country’s key legal foundations.

Other titles by Louis A. Knafla

Other titles by Jonathan Swainger

The Alberta Supreme Court at 100