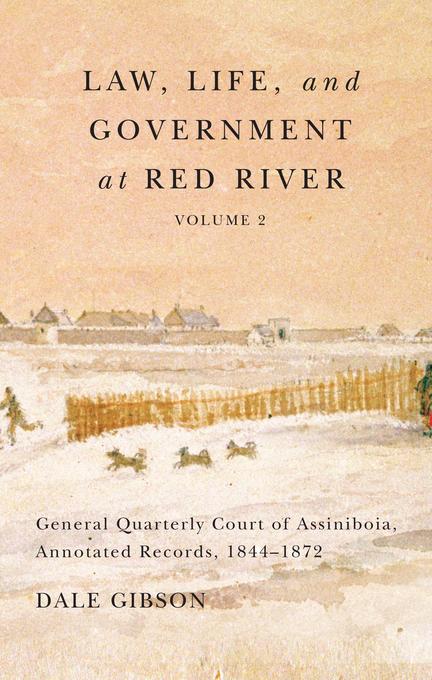 Inhabited by a diverse population of First Nations peoples, Métis, Scots, Upper and Lower Canadians, and Americans, and dominated by the commercial and governmental activities of the Hudson’s Bay Company, Red River – now Winnipeg – was a challenging settlement to oversee. This illuminating account presents the story of the unique legal and governmental system that attempted to do so and the mixed success it encountered, culminating in the 1869–70 Red River Rebellion and confederation with Canada in 1870.

In Law, Life, and Government at Red River, Dale Gibson provides rich, revealing glimpses into the community, and its complex relations with the Hudson’s Bay: the colony’s owner, and primary employer. Volume 2 provides a complete annotated, and never-before-published transcription of testimony from Red River’s courts, presenting hundreds of vignettes of frontier life, the cases that were brought before the courts, and the ways in which the courts resolved conflicts.

A vivid look into early settler life, Law, Life, and Government at Red River offers insights into the political, commercial, and legal circumstances that unfolded during western expansion.

Dale Gibson is Distinguished Professor Emeritus of law at the University of Manitoba.

Jim Phillips is Professor of Law, History and Criminology at the University of Toronto, and editor-in-chief of the Osgoode Society for Canadian Legal History. He has co-edited four volumes of the Osgoode Society for Canadian Legal History’s Essays in the History of Canadian Law and, with Philip Girard, a volume on the history of Canada’s oldest surviving superior common law court, The Supreme Court of Nova Scotia 1754-2004: From Imperial Bastion to Provincial Oracle (Osgoode Society, 2004). He has published over fifty articles and book chapters on British imperial history and 18th-century India, on property and charities law, US legal history, and, principally, Canadian legal history. He is also the author, with Rosemary Gartner, of Murdering Holiness: The Trials of Franz Creffield and George Mitchell (University of British Columbia Press, 2003).

Other titles by Dale Gibson

Attorney for the Frontier

Other titles by Jim Phillips

The Trials of Franz Creffield and George Mitchell

A History of Canadian Legal Thought

Between State and Market

Essays in the History of Canadian Law

In Honour of R.C.B. Risk