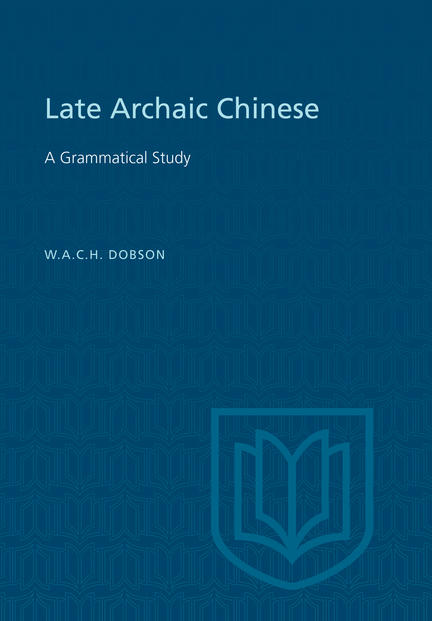 In this book, Professor Dobson has laid the foundations for a systematic and scientific study of the grammar of Classical Chinese. He has devised a system set up according to the canons of modern linguistic science – a system which is at once intrinsic to the language itself, one that makes possible a proper accounting for all of the data and does so with economy, and one which produces solutions which are repoduceable and predictable.

This volume deals in detail with Late Archaic Chinese, the language of the classical texts of Mencius, Micius, Chung-Tzu and Tso-chuan. A total accounting is provided for all forms and particles occurring at this period. A feature of the description is that the analytical categories set up are based on levels and types of distribution, that is to say, that word and unitary classes are characterized by environmental, rather than by intrinsic, features. Thus the classes and categories recognized are directly observable in the material. In a language in which accidence plays no part, but in which grammatical values are environmentally imposed, such a system enables observation of a precise and predictable kind. Late Archaic Chinese has now, for the first time, been scientifically, comprehensively and precisely described.

This book will take its place among the standard sinological reference works but it will also be of interest to linguists for the contribution it makes to theoretical linguistics.

Chinese characters used in printing the book were loaned by the Harvard Yenching Institute, Harvard, University.

W.A.C.H. Dobson (1913-1982) was a professor of Chinese and Head of the Department of East Asiatic Studies at the University of Toronto, a Fellow of the Royal Society of Canada, and a graduate in Oriental Studies from Oxford, of which university he was a Doctor of Letters. He wrote extensively on the Chinese language and is the author of numerous articles in scholarly journals as well as a number of books: The Civilization of the Orient; Late Archaic Chinese: a Grammatical Study; Early Archaic Chinese: A Descriptive Grammar; Mencius: a New Translation Arranged and Annotated for the General Reader; Late Han Chinese: the Archaic-Han Shift; and The Language of the Book of Songs.

Other titles by W.A.C.H. Dobson

A New Translation Arranged and Annotated For The General Reader

The Language of the Book of Songs

A Study of the Archaic-Han Shift

A Dictionary of the Chinese Particles