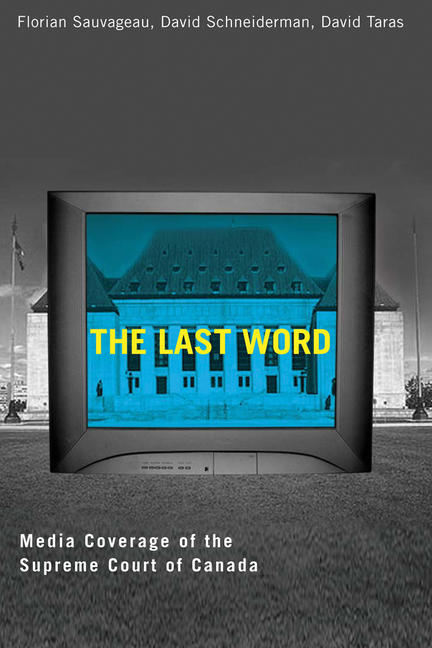 Media coverage of the Supreme Court of Canada has emerged as a crucial factor not only for judges and journalists but also for the public. It’s the media, after all, that decide which court rulings to cover and how. They translate highly complex judgments into concise and meaningful news stories that will appeal to, and be understood by, the general public. Thus, judges lose control of the message once they hand down decisions, and journalists have the last word.

To show how the Supreme Court has fared under the media spotlight, Sauvageau, Schneiderman, and Taras examine a year in the life of the court and then focus on the media coverage of four high-profile decisions: the Marshall case, about Aboriginal rights; the Vriend case, about gay rights; the Quebec Secession Reference; and the Sharpe child pornography case. They explore the differences between television and newspaper coverage, national and regional reporting, and the French- and English-language media. They also describe how judges and journalists understand and interact with one another amid often-clashing legal and journalistic cultures, offering a rich and detailed account of the relationship between two of the most important institutions in Canadian life.

DAVID SCHNEIDERMAN is the Executive Director of the Centre for Constitutional Studies at the University of Alberta. He is the editor of six books and the author of many journal and newspaper articles.

David Taras holds the Ralph Klein Chair in Media Studies at Mount Royal University. He is the author of several books, including The Newsmakers: The Media's Influence on Canadian Politics (1990) and Power and Betrayal in the Canadian Media (2001), and co-author of Last Word: Media Coverage of the Supreme Court of Canada (2005).

For the first word on a complex subject, they have produced a book that is thought-provoking, authoritative, impeccably researched and grounded in reality.

Other titles by David Schneiderman

Red, White, and Kind of Blue?

The Conservatives and the Americanization of Canadian Constitutional Culture

Perspectives on the Supreme Court Ruling on Secession

The Impact of Charter Rights on Canadian Law and Politics

The Evolution and Practice of Authority

Social Justice and the Constitution

Perspectives on a Social Union for Canada

Other titles by David Taras

The End of the CBC?

Media, Power, and Identity in Canada

Power and Betrayal in the Canadian Media

Canada and the Arab-Israeli Conflict