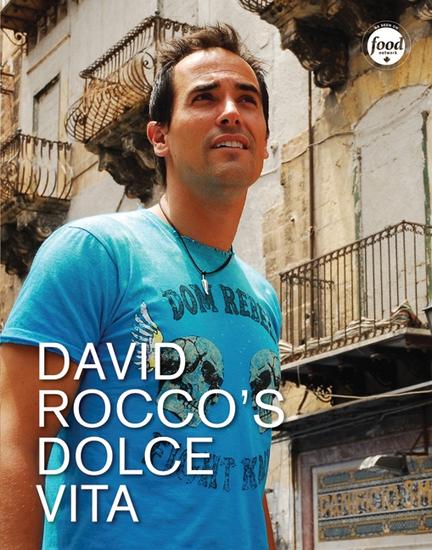 “I’m not a chef; I’m Italian!”
After three seasons of the popular television series David Rocco’s Dolce Vita, its eponymous host David Rocco has become one of Canada’s most popular celebrity cooks. His show is aired on Food Network Canada, in Italian on TLN and in French in Quebec via TVA . He was chosen as one of Flare magazine’s 20 most stylish Canadians. David’s popularity goes well beyond Canada. His show airs in 100 countries around the world. As a proud Italian-Canadian, David says his love for food, cooking, and preparing meals for friends and family is part of his DNA .
Eagerly anticipated, this book is full of everything that makes the TV show such a favourite: beautiful food photography and locales, and, of course, David’s sense of la dolce vita, the sweet life. His cookbook is all about taking a relaxed, enjoyable approach to the everyday, and the foundation of this lifestyle is simple, elegant food. David’s easygoing style embraces straightforward ingredients and techniques to create wonderful dishes anyone can enjoy without stress. He emphasizes the philosophy of quanto basta, or “just enough,” and encourages readers to suit their own tastes.
Try some of David’s wonderful sfizzi, simple but sophisticated snacks: Fiori de zucca (zucchini flowers stuffed with mozzarella and anchovies) or Frico (parmigiano chips). Delight in Spaghetti con pomodorini e pecorino (spaghetti with cherry tomato sauce and pecorino cheese), delicious Beef carpaccio (easier than you think!), or melt-in-your-mouth Gnudi (“naked” ravioli). For something truly sweet, why not try his simple spin on the classic Italian dessert, Tiramisù al limone? From antipasti to mains to desserts to brilliant and delicious uses for leftovers, David Rocco shows you how to bring la dolce vita into your life.

DAVID ROCCO says, “I’m not a chef, I’m Italian!” His cooking learned at his mother’s side, David is the epitome of an Italian food lover: adventurous, opinionated and fantastic to be around at dinnertime. Dolce Vita is shown in over 150 countries around the globe, and as of 2010 it has been airing on the Cooking Channel to over 80 million homes in the United States. Season 5 is airing on the Food Network in September 2015. La Dolce Vita–branded wines have launched in Ontario’s LCBO and are set to roll out across the country. Formerly a model, David Rocco spends his time developing new concepts for his company, Rockhead Entertainment, with his wife and business partner, Nina. They have three children and split their time between Toronto and Italy. Check out his website at www.davidrocco.com.

Other titles by David Rocco