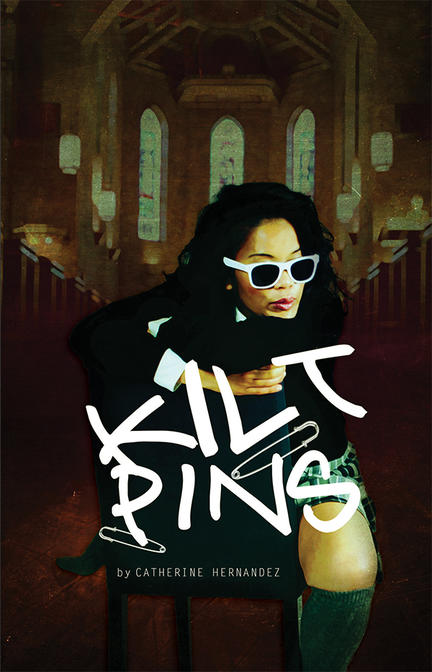 In a Catholic high school in Scarborough, Ontario, amidst low-income housing, difficult race relations, and poverty, a young woman struggles to find her sexual identity. In this sincere portrayal of high-school kids pitting the voice of God and thousands of years of scripture against the voice of their own bodies, Kilt Pins cheekily asks "Is your kilt pin up or down?"

Catherine Hernandez (she/her) is an award-winning author and screenwriter. She is a proud queer woman who is of Filipino, Spanish, Chinese and Indian descent and married into the Navajo Nation. Her first novel, Scarborough, won the Jim Wong-Chu Award for the unpublished manuscript; was a finalist for the Toronto Book Awards, the Evergreen Forest of Reading Award, the Edmund White Award, and the Trillium Book Award; and was longlisted for Canada Reads. She has written the critically acclaimed plays Singkil, The Femme Playlist and Eating with Lola and the children’s books M Is For Mustache: A Pride ABC Book and I Promise. She recently wrote the screenplay for the film adaptation of Scarborough, which is currently in post-production by Compy Films with support from Telefilm Canada and Reel Asian Film Festival. She is the creator of Audible Original’s audio sketch comedy series Imminent Disaster. Her second novel, Crosshairs, published simultaneously in Canada and the US and the UK this spring, made the CBC's Best Canadian Fiction, NOW Magazine's 10 Best Books, Indigo Best Book, Audible Best Audiobooks and NBC 20 Best LGBTQ Books list of 2020. Her third children's book, Where Do Your Feelings Live? which is a guide for kids living through these scary times, has been commissioned by HarperCollins Canada and will be published in winter 2022.

Other titles by Catherine Hernandez

Where Do Your Feelings Live?

M Is For Mustache