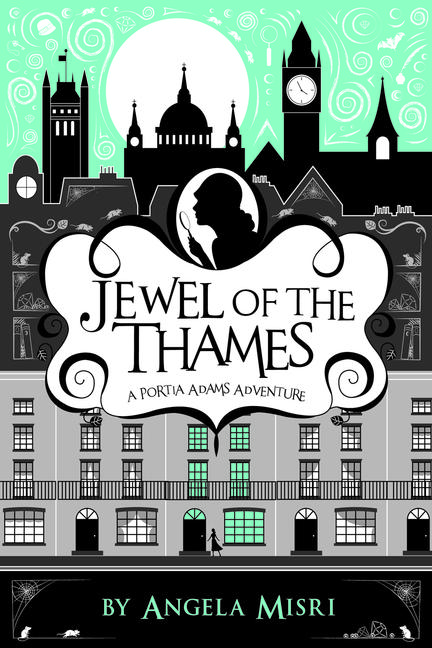 There’s a new detective at 221 Baker Street. Set against the background of 1930s England, Jewel of the Thames introduces Portia Adams, a budding detective with an interesting —and somewhat mysterious —heritage. Nineteen-year-old Portia Adams has always been inquisitive. There’s nothing she likes better than working her way through a mystery. When her mother dies, Portia is left puzzling over why she was she left in the guardianship of the extravagant Mrs. Jones? Portia is promptly whisked from Toronto to London by her guardian, where she discovers that she has inherited 221 Baker Street — the former offices of Sherlock Holmes and Dr. Watson. Portia settles into her new home and gets to know her downstairs tenants, including the handsome and charming Brian Dawes. She also finds herself entangled in three cases: the first one involving stolen jewelry, the second one a sick judge and the final case revolving around a kidnapped child. But the greatest mystery of all is her own. How did she come to inherit this townhouse? And why did her mother keep her heritage from her? Portia has a feeling Mrs. Jones knows more than she is letting on. In fact, she thinks her new guardian may be the biggest clue of all.

Angela Misri is an author and journalist of Indian descent. She was born in London, U.K., and briefly lived in Buenos Aires before moving to Canada in 1982. Angela is the author of the Portia Adams Adventures series and several essays on Sherlock Holmes. In 2019, she published Pickles vs. the Zombies, her first book about animals in a zombie apocalypse, to widespread acclaim. She earned her BA in English Literature from the University of Calgary and her MA in Journalism from the University of Western Ontario. As a former CBC Radio digital manager and the Digital Director at The Walrus, Angela is never offline (although she prefers to write long form in notebooks). Angela plays MMORPGs, speaks several web languages, and owns too many comic books. She currently lives in Toronto, Ontario.

Other titles by Angela Misri

Trip of the Dead

The Detective and the Spy

Pickles vs. the Zombies

No Matter How Improbable: A Portia Adams Adventure (Book 3)