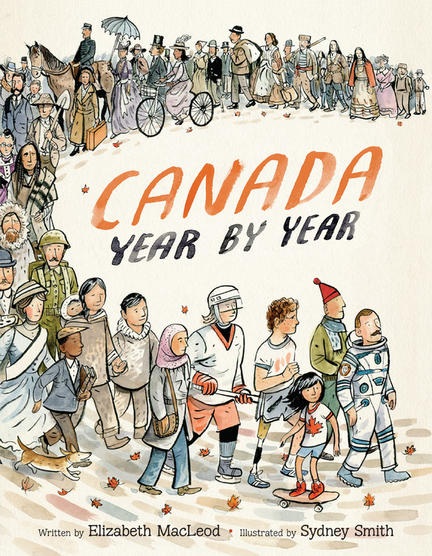 Award-winning author Elizabeth MacLeod's year-by-year tour of Canada's fascinating history highlights a single milestone for every year from the country's founding in 1867 up to its 150th anniversary in 2017. Divided into ten distinct eras, coverage ranges from politics, sports, business and arts and culture, and includes significant events both at home and in world affairs. A few examples: *1881 --- A railway across Canada is begun. *1893 --- The Stanley Cup is first awarded in hockey. *1908 --- Lucy Maud Montgomery's Anne of Green Gables is published. *1947 --- Oil is discovered in Alberta. *2015 --- Liberal Party leader Justin Trudeau is elected prime minister. Along with the featured stories for each of the 150 years, the pages are filled with sidebars --- with content such as short biographies, quotes, important firsts and trivia --- that are linked to that year. There are also 39 capsule biographies of noteworthy Canadians at the back of the book. The topics chosen offer an inclusive historical perspective, incorporating women, Aboriginal peoples and people with disabilities into Canada's rich and diverse narrative. Illustrations by awarding-winning artist Sydney Smith bring a contemporary feel to the stories of the past. This book is a perfect fit for lessons on Canadian history and geography. The accessible format also makes it a compelling choice for children to pick up and browse, or to search for a particular year. A table of contents and an index round out this engaging reference.

Both revelatory and entertaining ...

... this colorful book will be a useful addition to libraries on both sides of the border.

Interesting, educational and entertaining, Canada Year by Year has a place in every public school and library.

... this book will be a hit with historians and trivia buffs alike.

With such rich information complemented by its appealing visuals, children, adults, residents of Canada --- old and new --- and non-residents, will each find Canada's unique story engaging.

An excellent overview of Canadian history and culture, perfect for browsing or for research.