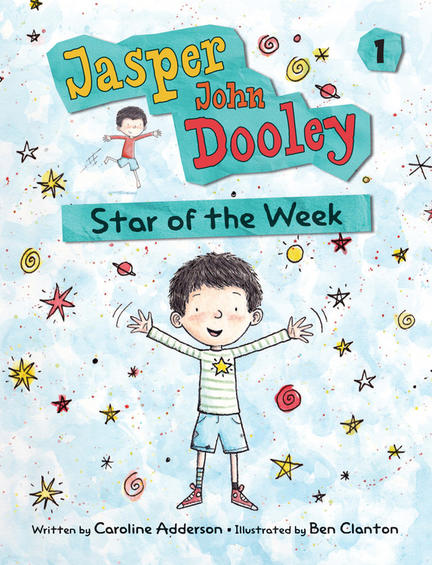 At last, it's Jasper John Dooley's turn to be Star of the Week at school. Unfortunately, nothing turns out as planned. His Show and Tell falls flat. A new baby at his friend Ori's house steals his spotlight. And worst of all, the new baby has only-child Jasper wondering if his own family is too small. When Jasper decides to build himself a brother (named Earl) out of wood, Earl's schoolyard shenanigans send Jasper to the principal's office! But with a little help from family and friends, things turn around for Jasper. And by the time Friday arrives, he is once again sure that he has what it takes to be a star.

Jasper John Dooley: Star of the Week is the first in a series of chapter books featuring a charismatic and funny central character. An only child with active, loving parents (and a most impressive lint collection), Jasper John Dooley is a true original.

Ben Clanton is an up-and-coming author-illustrator from Seattle who describes himself as a “story scribbler, picture squiggler, book aficionado, child advocate, dragon tamer and avid sock wearer.” Vote for Me! is the first book he has both written and illustrated.

This well-written, funny, and engaging story is a promising start to a new chapter-book series ...

Readers will identify with many of Jasper's comical, age-appropriate issues as he navigates the sometimes confusing complications of early primary school.

This first title in a transitional chapter book series introduces an enthusiastic boy full of creativity and everyday concerns.

... a work of genius ... it has a playful sparkle that makes it truly exceptional.

In Jasper John Dooley: Star of the Week, the eponymous protagonist is perhaps the only child in his class who fails to understand that being the week’s “star” is an extended homework assignment. Indeed, much of the gentle humour in this book arises from the differences between what Jasper and the reader understand. Jasper cannot fathom, for example, why a classmate thinks he is poor when he brings his beloved collection of scented dryer lint for Show and Tell. Conflict arises when the birth of his friend Ori’s colicky sister eclipses Jasper’s star status. Jasper’s subsequent quest for his own “pretty purple” sibling causes a funny, touching chain of events during which Jasper discovers that a baby sibling is more than an attention-getting accessory. Jasper’s good-heartedness, hilarious logic and unique outlook will attract youngsters to this promising new series. They will also enjoy Clanton’s expressive, childlike, black-and-white drawings. Parents will appreciate the real issue that underlies the humour (i.e., Jasper’s unhappiness at his family’s size).

Jasper John Dooley is finally the Star of the Week at school, but things don’t go as planned and no one is interested in his Show and Tell. With the help of his parents, friends and a hammer and nails, Jasper manages to turn things around and regain his classmates’ attention.

Other titles by Ben Clanton

Narwhal: Unicorn of the Sea! (A Narwhal and Jelly Book #1)

Narwhal: Unicorn of the Sea (A Narwhal and Jelly Book #1)

Jasper John Dooley: You're in Trouble

Jasper John Dooley: NOT in Love

MG Fiction to Make You Snort Milk out Your Nose

Great books to entice reluctant readers or to read aloud to a younger crowd.