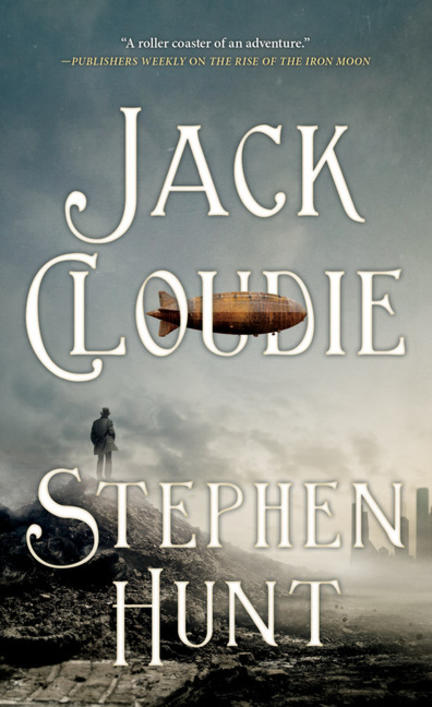 Jack Cloudie is a tale of high adventure and derring-do set in the same Victorian-style steampunk world as Stephen Hunt's acclaimedThe Court of the AirandThe Secrets of the Fire Sea.

Thanks to his father's gambling debts, young Jack Keats finds himself on the streets and trying to survive as a pickpocket. Following a daring bank robbery gone badly awry, Jack narrowly escapes the scaffold, only to be pressed into the Royal Aerostatical Navy. Assigned to the most useless airship in the fleet, serving under a captain who is most probably mad, Jack seems to be bound for almost certain death in the faraway deserts of Cassarabia.

Meanwhile, on the other side of the world, the slave Omar ibn Barir finds his life turned upside down when his master's religious sect is banned. Unexpectedly freed, he joins the Caliph's military forces—just as war is brewing.

Two very similar young men prepare to face each other across a field of battle. But is Omar the enemy, or is Jack's true nemesis the sickness at the heart of the Caliph's court?

“A roller coaster of an adventure… A dash of earth magic and a dose of environmental angst make this an enjoyable ride.” —Publishers Weekly on The Rise of the Iron Moon

“A swaggering, eye-filling, brain-swizzling extravaganza!” —Kirkus Reviews on The Rise of the Iron Moon

“Compulsive reading for all ages.” —The Guardian (UK) on The Rise of the Iron Moon

“All manner of bizarre and fantastical extravagance.” —Daily Mail (UK) on The Rise of the Iron Moon

The Court of the Air