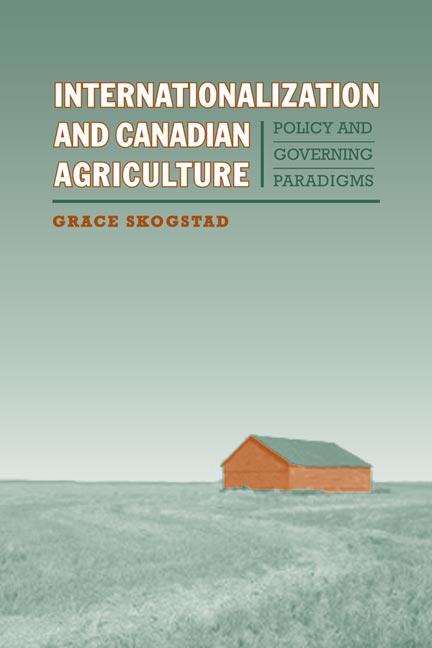 In recent decades, Canada's agricultural industry, one of the world's largest, has had to adjust to global trade developments such as the North American Free Trade Agreement (NAFTA) and the World Trade Organization. Internationalization and Canadian Agriculture examines the patterns of continuity and change in Canadian agricultural policy making in important areas like farm income support programs, prairie grain marketing, supply management, animal and food product safety, and the regulation of genetically modified crops and foods.

Arguing that the effects of internationalization have been mediated by Canada's political institutional framework, Grace Skogstad demonstrates how the goals and strategies of authoritative political actors in Canada's federal and parliamentary systems have been decisive to policy developments. Skogstad details the interaction between agriculture and the political economy of Canada, shows how international and domestic trade shape Canadian agricultural policies, and argues that while agricultural programs have changed, the post-war state assistance agricultural paradigm has persisted.

A thorough political analysis and history of late twentieth- and early twenty-first-century Canadian agricultural policy and policy-making, Internationalization of Canadian Agriculture is an important contribution to political economy and public policy.

Grace Skogstad is a professor in the Department of Political Science at the University of Toronto.

Other titles by Grace Skogstad

The Global Promise of Federalism

The Politics of Agricultural Policy-making in Canada