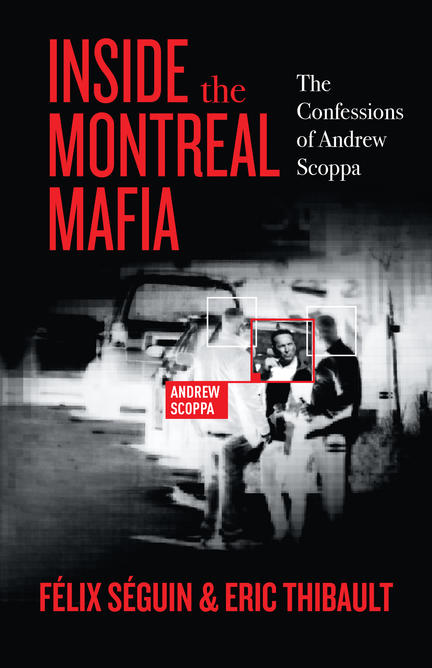 “Inside the Montreal Mafia is an entertaining, illuminating, and often sobering look at the downfall of the Rizzuto crime family … Highly readable and engaging.” — Montreal Review of Books

A groundbreaking, exclusive inside look at the North American Mafia and the Rizzuto family

For the first time in Canadian history, a high-ranking mafioso agreed to break the code of omertà by talking to journalists. From October 2014 to October 2019, Félix Séguin and Eric Thibault held multiple secret meetings with Andrew Scoppa, getting an exclusive inside look at the inner workings of the North American Mafia. This book is the culmination of their perilous investigation. It sheds light on the life — and death — of one of the most influential organized crime figures in recent years.

At exactly 2 p.m., there was a knock at the door. It was him: the source every journalist dreamed of having. The short man was armed and placed his gun on a table.

“Are you impressed?” he asked with a broad grin.

Before me was Andrew Scoppa, close confidant of the late mafia boss Vito Rizzuto, international heroin trafficker and cold-blooded killer.

Born in Gaspésie, Eric Thibault has covered police and organized crime in Quebec since 1993. He has written for the Journal de Montréal since 2011.

Félix Séguin has covered multiple major national and international news stories since the early 2000s. He specializes in police investigations and organized crime. Inside the Montreal Mafia is the third collaboration between Eric Thibault and Félix Séguin, following Gallant: Confessions d’un tueur à gages and Le livre noir des Hells Angels. Séguin and Thibault are both members of the Québecor Investigative Bureau.

Excerpt: Inside the Montreal Mafia: The Confessions of Andrew Scoppa (by (author) Félix Séguin & Eric Thibault; translated by Julia Jones)

At exactly 2 p.m., there was a knock at the door. It was him: the source every journalist dreamed of having. The short man was armed and placed his gun on the table I’d moved between the bed and a chair.

“Are you impressed?” he asked with a broad grin.

Before me was Andrew Scoppa: close confidant of the late godfather Vito Rizzuto, international heroin trafficker, and cold-blooded killer. According to police sources, this Mafia clan leader was suspected of having a hand in no less than 15 murders.

“Do you know you’re lucky? Many people would go fucking crazy to meet the Broom,” he told me.

He explained it was a nickname he’d been given on “the street” because of a method he’d invented to get reluctant borrowers to pay up.

To be honest, I was somewhat surprised that this man had received so much media coverage in recent years. He had little of the charisma that Vito Rizzuto exuded over his subjects. He was dressed simply: running shoes, jeans, a beige sweater, a blue coat and an Under Armour baseball cap fastened tightly around his head. He worked out often and told me so the first time we met.

“Me, I train every fuckin’ day. Rain or shine, I fuckin’ train you know, because a lot of shit is going through my life at this time,” he said, holding his head in his hands.

I told him I was a runner and was planning to complete my first marathon in two years.

“Cardio is not good, you should stop,” he replied bluntly. That he worked out was obvious: his beige sweater struggled to contain his biceps.

While Andrea Scoppa may not have been as dapper as Vito Rizzuto, he did have something in common with the godfather: an incredibly low tone of voice that lent gravity to his words. It was as though each time he finished a sentence, he wanted to make sure he’d been heard and understood so as not to have to repeat himself. Like most Montreal mobsters, he spoke an English that resembled that of Tony Soprano, the protagonist of the American TV show The Sopranos.

When I offered to share the tomato and bocconcini and plate of prosciutto and melon I’d ordered from the restaurant downstairs, he flatly refused my offer.

“How can I be so sure that you won’t poison me?” he exclaimed with a boom of laughter.

To be fair, he had good reason to be suspicious. Barely a year earlier, Mafia kingpin Giuseppe De Vito, one of Scoppa’s associates, had died of cyanide poisoning in his Donnacona prison cell.

“A fresh, fascinating, deep look at the Montreal Mafia, told by two veteran journalists with a firm grip on their subject matter and a knack for storytelling.” — Peter Edwards, co-author of The Wolfpack: The Millennial Mobsters Who Brought Chaos and the Cartels to the Canadian Underworld (with Luis Horacio Nájera)

“A unique look at the inner workings of the crime leaders in Canada … There are many things to learn from this book.” — Lance Writes blog

“Located somewhere near the intersection of an in-depth profile of the inner machinations of organized crime in Quebec, a recent history of the Montreal Mafia, and a years-long interview with a high-ranking gangster in need of a good psychologist, Inside the Montreal Mafia is an entertaining, illuminating, and often sobering look at the downfall of the Rizzuto crime family … Highly readable and engaging.” — Montreal Review of Books