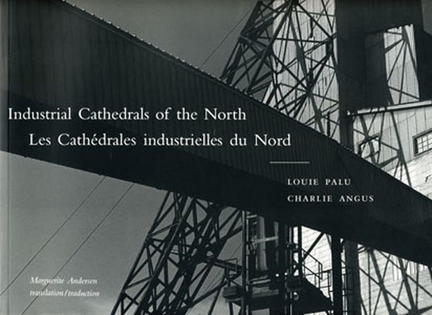 Headframes dominate the landscape of mining communities in Northeastern Ontario and Northwestern Quebec. Distinctive structures built to house the apparatus at the head of the mine shaft, headframes tower above their surroundings, reminding every resident that without the mine, there would be no reason for their settlement to exist. For the past several years, photographer Louie Palu and writer Charlie Angus have been documenting historic mining sites in the north. Many of these have since been erased from the landscape. Co-produced with Prise de parole.

Charlie Angus has served as the NDP Member of Parliament for Timmins-James Bay since 2004. In 1985 he formed the Juno-nominated alt-country band Grievous Angels. He became involved in politics through his organizing efforts to stop the Adams Mine garbage proposal and numerous plans to import PCBs to Northern Ontario. He is author/co-author of five books on Northern Ontario life and culture including We Lived A Life And Then Some and Mirrors of Stone.

Marguerite Andersen writes mostly in French. An autobiographical novel, De mémoire de femme, won the Prix du Journal de Montréal in 1983; La Soupe, also a novel, won the Grand Prix du Salon du livre de Toronto in 1995. Written in English, Christiane Pflug: Stations in a Painter's Life, is a theatrical account of the life and suicide of the Berlin born Toronto painter. It was successfully performed in 1996, during The Gathering, a festival of women's voices presented in Toronto by Women's Theater Works. Editor of Mother Was Not a Person - the 1970 bestseller of writings by Montreal women - Marguerite Andersen has taught Women's Studies and Modern French Literature at Concordia University, the University of Guelph and held the Nancy Ruth Chair of Women's Studies at Mount St. Vincent University. Twice a finalist for the Trillium Award, she lives in Toronto and is the editor of the short story magazine Virages.

Other titles by Charlie Angus

Cradle of the Demon Metals, Birth of a Mining Superpower

Children of the Broken Treaty

A Collection of Photographs of Temiskaming, Ontario

The Story of the Adams Mine Dump War

We Lived a Life and Then Some

The Life, Death, and Life of a Mining Town

Other titles by Louie Palu

Other titles by Marguerite Andersen