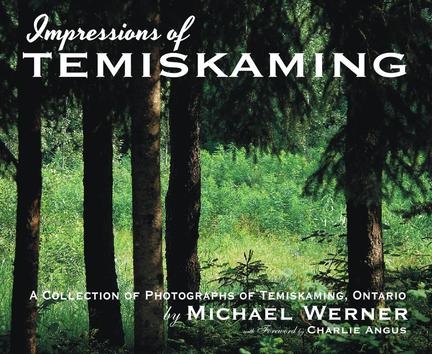 In an artful combination of informative text and beautiful photography, Michael Werner has effectively captured the essence of Temiskaming's varied landscape. With its collection of over 150 vivid images, this book serves equally as an introduction to the area for those who have yet to experience it, or as a crisp synopsis for those who have a greater familiarity with the Temiskaming landscape.Visitors to Temiskaming will find the book an elegant keepsake of the Temiskaming area. Locals, too, will find it an enjoyable, attractive and informative coffee-table book. The images in this book will strike a familiar, resonant chord for those who have lived even a small portion of their lives amidst the exhilarating and picturesque Temiskaming landscape.This beautiful hardcover book is 8.75 x 11.5 inches, in landscape orientation. The book is "Smyth-sewn", the highest quality and most durable binding method available, which will allow the book to lay open on a table.This book attempts to explore that which makes Temiskaming unique. "The goal of this book is to reinforce a sense of place, that elusive gestalt that represents the truth of what Temiskaming is in the hearts and minds of the people that call this their home," says author and photographer Michael Werner.The book is divided into three sections, each exploring a part Temiskaming: "The Deep Water" features Lake Temiskaming itself, "The Little Clay Belt" features the agricultural rift valley, and "The Forested Uplands" explores the bedrock-controlled topography of Temiskaming's hinterland. Each section is introduced by a full page of text. Most of the photos also have informative captions. Images have been captured from widely throughout Temiskaming District, though each individual chapter is from a more restricted locational palate.All of the photographs in this book were taken between 2007 and 2012. With the exception of the photographs of wildlife subjects, most of the images in this book are of an identifiable and recognizable location in Temiskaming. The wildlife photographs, too, were all taken in Temiskaming, and although the exact location may not be apparent in many of the photographs themselves, they are chosen and included to elucidate another aspect of the character of the Temiskaming landscape.Michael reflects, "In focusing on a subject through the camera lens, my goal is to better appreciate, even to glorify, the beauty that is already there. The photograph itself, therefore, should not be contemplated as the object of beauty. Though the photographer may have helped bring it into focus, the beauty was already real." He continues, "Enjoy the images in this book, but then go out and find your own Temiskaming, and enjoy the great beauty that is always there, all around us, every day."

Charlie Angus has served as the NDP Member of Parliament for Timmins-James Bay since 2004. In 1985 he formed the Juno-nominated alt-country band Grievous Angels. He became involved in politics through his organizing efforts to stop the Adams Mine garbage proposal and numerous plans to import PCBs to Northern Ontario. He is author/co-author of five books on Northern Ontario life and culture including We Lived A Life And Then Some and Mirrors of Stone.

Other titles by Charlie Angus

Cradle of the Demon Metals, Birth of a Mining Superpower

Children of the Broken Treaty

The Story of the Adams Mine Dump War

Industrial Cathedrals of the North

We Lived a Life and Then Some

The Life, Death, and Life of a Mining Town