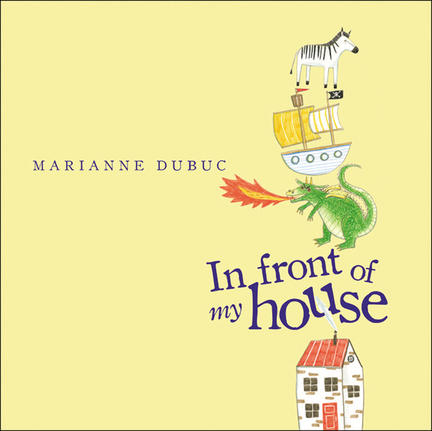 In Front of My House is a whimsical celebration of a child's imagination and all the places it can travel. This circular story begins and ends in a tidy front yard, but in between takes the reader to mountains and mysterious caves, up to outer space, down into the ocean and beyond. It's a journey as boundless and surprising as young imaginations.

Filled with inventive and delightful twists, this charming story reveals a child's fancy taking flight, showing how imaginative play can begin in a place as mundane as a front yard, reach to the stars, then return back to the same place. Children will recognize a kindred imagination in Marianne Dubuc's joyful illustrations and simple text.

Marianne Dubuc studied visual arts and graphic design before beginning her career as an award-winning author and illustrator. In Front of My House, originally published in French as Devant ma maison , is her first book to be published in English. Marianne lives in Montreal, Quebec.

This little gem has everything: text that will keep youngsters guessing as well as making up their own places to explore, and even an opportunity to make sense of those elusive prepositions. Don't miss this journey.

In Front of My House

In Front of My House invites you to join a magical journey which starts and ends in a front yard, but travels to wildly creative destinations in between. The expedition begins ordinarily enough: “On a little hill behind a brown fence, under a big oak tree is... my house.” We tour the yard: “In front of my house... a rosebush. On the rosebush... a little bird. Above the little bird... a window.” and then the inside of the house. However, when a book of fairy tales is discovered, the narrator’s imagination takes over, and a variety of storybook characters, animals and exotic locales are introduced. We travel through forests, climb mountains, ascend into outer space, and eventually end up at the house where the adventure began. We have come full circle!

Marianne Dubuc’s playful text unfolds from a child’s point of view. She gives her narrator permission to explore the world in an uninhibited and amusing manner. Dubuc’s sentences are simple, containing many prepositions which drive the story forward: “Next to the stars... a full moon. Under the full moon... a werewolf. Behind the werewolf... a ghoooooost.” This momentum keeps the reader wanting to turn the pages in order to discover the next revelation. At times the print matches the words’ meaning. Note the curved shape of “tentacle ” and how “vampire ” hangs upsidedown like a bat.

Dubuc’s sense of humour is also evident in her child-like pencil crayon illustrations. Set against a white background, each picture delights us with its charm and positive energy.

Our journey concludes where it commenced. No doubt readers will want to read In Front of My House again and again, coming full circle many times over.

In Front of My House

A whimsical celebration of a child’s imagination and all the places it can travel. Filled with inventive twists, this charming circular story begins and ends in a tidy front yard, but in between winds its way through the wilds of a magical reality. A wonderful resource to use when teaching young students about prepositions, this title is also available in French as Devant ma maison.

Other titles by Marianne Dubuc

Bear and the Whisper of the Wind

Your House, My House

What Do You Want, Little Friend?

And Then the Seed Grew

Up the Mountain Path (Ages 5-8. picture book about friendship and the natural world)

The Fish and the Cat