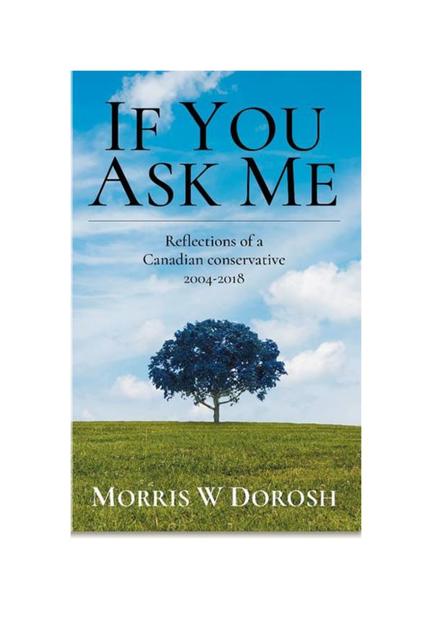 "Populism is not a political theory, system or ideology. It is a crude appeal to a certain part of the population gaining support by reinforcing their belief that their economic and social attainments are limited by a political system that disadvantages them..."

What is the influence of conservative principles on the Canadian political landscape? What are current conservative positions on today's issues and events? Is Canada a conservative-friendly country or have we, as a nation, moved so far left that almost any conservative view or perspective gets trashed almost immediately? These questions, and others, Morris W Dorosh attempts to answer in his new book, You Ask Me: Reflections of a Canadian Conservative.

Dorosh argues that political interaction today is unprecedentedly combative. Civility, respect for opposing points of view, common sense, and the capacity for compromise belong to a different age. To an age where one's qualifications for a political position were crucial to being elected. Political life today, he points out, disproportionally attracts candidates of mediocre ability because of the economic benefits offered by the positions. Thus, we end up with legislators with responsibilities and authority for which they have little experience, less preparation and no background.

The book is a collection of opinion papers first penned by Dorosh in Agri-Week, a newsletter for executives, owners and investors now in its 52nd year of publication.

Morris W Dorosh is the dean of Canadian specialty, subscriber-supported newsletters. His current and former titles include Ottawa Week, Agri-Week among many others. He has been a contributor to The National Post and divides his time between Winnipeg, Toronto and Florida.