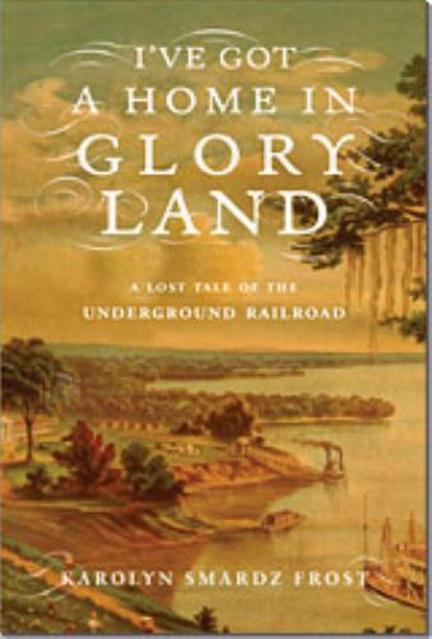 Winner of the Governor General's Award for Non-Fiction, 2007
It was the day before Independence Day, 1831. As his bride, Lucie, was about to be "sold down the river" to the slave markets of New Orleans, young Thornton Blackburn planned a daring -- and successful -- daylight escape from Louisville. But they were discovered by slave catchers in Michigan and slated to return to Kentucky in chains, until the black community rallied to their cause. The Blackburn Riot of 1833 was the first racial uprising in Detroit history.

Karolyn Smardz Frost is an archaeologist, historian, and award-winning author. Now an adjunct professor at Acadia and Dalhousie, she is the former bicentennial visiting professor at Yale University and served as senior research fellow for African Canadian History at York University’s Harriet Tubman Institute. Her biography of freedom-seekers Lucie and Thornton Blackburn, I’ve Got a Home in Glory Land: A Lost Tale of The Underground Railroad, won the Governor General’s Award for Non-Fiction. She co-edited The Archaeology Education Handbook: Sharing the Past with Kids; Ontario’s African-Canadian Past; and the landmark Canada–U.S. collaborative volume, A Fluid Frontier: Slavery, Resistance and the Underground Railroad in the Detroit River Borderland. Karolyn’s most recent book is the award-winning Steal Away Home, which tells the tale of fifteen-year-old Cecelia Jane Reynolds who arranged her own flight to freedom and found a new home in Toronto. She lives in Nova Scotia’s beautiful Annapolis Valley.

I Have a Home in Glory Land is a remarkable book, appealing in its impeccable research and in the excitement and suspense of the story it tells.

...a rare and moving portrait of the 'peculiar institution' that was slavery in America.

Karolyn Smardz Frost's superb research has produced a wonderful account of the underground railroad, elevating Thornton and Lucy Blackburn to their rightful place in the dramatic story of pre-Civil War slave resistance, abolition, and African American life on both sides of the U.S.-Canadian border. This finely detailed account depicts a truly international antislavery movement.

James Oliver Horton and Lois E. Horton, coauthors of Slavery and the Making of America and Hard Road to Freedom

...an edifying and accessible work that does not relegate slavery to some cob-webbed corner of the past, but portrays it as a central reality of the history of this continent.

... a fascinating tale that looks at this history from a fresh perspective. A key point, often forgotten in our rush to praise the Underground Railroad, is emphasized here-- that the real heroes were the slaves themselves, who risked everything for freedom.

Frost's compelling book pays tribute to these Canadian pioneers and brings to light a story that deserves to be remembered.

Smardz Frost has combined solid academic research with a compelling story that deserves a wider audience.

This book should be required reading because it details what African-Canadians went through to experience a basic human right-- freedom. Frost uses her research to paint a sickening portrait of the abuses that slaves and escaped fugitive slaves had to endure. Yet that same narrative also shows a strong couple who never resorted to vengeance but used their new-found influence and prosperity to help others in their own quests for freedom.

A deep-digging work of rich historical recovery, I've Got a Home in Glory Land is really two books: a biography of two famous runaways and a sifting of the rock-filled times in which they lived.

Edward Ball, author of Slaves in the Family and Peninsula of Lies

To retrace the journey of a runaway slave from the Ohio River Valley all the way to Canada is an immense challenge and a rare accomplishment. In her well-researched and well-written book, Karolyn Smardz Frost has done just that--and more. Bravo for Frost who has saved a remarkable story from the fate of other important histories that have been lost. Only by piecing together such stories and revealing the bold choices runaway slaves were forced to make, the dangers they faces, and the courage required to forge ahead, can we ever fully grasp how difficult it was for a slave in antebellum America to achieve freedom and just how desperate people can be to get free.

Ann Hagedorn, author of Beyond the River: The Untold Stories of the Heroes of the Underground Railroad

Thanks to Dr. Smardz Frost's talent for storytelling, [the Blackburns'] biography, especially the account of their escape from slavery and flight into Canada two years later, reads at times like a fine historical novel.

A most worthy addition to the literature surrounding American slavery...

A vivid historic tale of slavery, freedom, love and history...

Other titles by Karolyn Smardz Frost