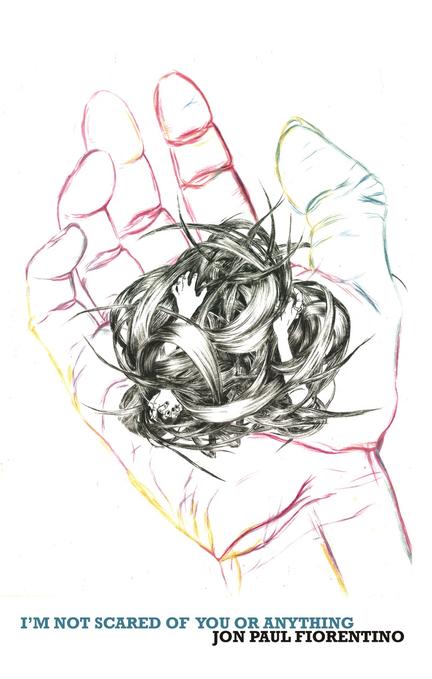 Winner, National Magazine Award, Silver Medal for Humour, for the story "It Seems Like Sex is a Weird Thing That Used to Happen to Me," from I'm Not Scared of You or Anything

The characters in I’m not Scared of You or Anything are invigilators, fake martial arts experts, buskers, competitive pillow fighters, drug runners, and, of course, grad students. This collection of comedic short stories and exploratory texts is the ninth book by the critically acclaimed and award-winning author Jon Paul Fiorentino. Deftly illustrated by Maryanna Hardy, these texts ask important questions, like: How does a mild mannered loser navigate the bureaucratic terrain of exam supervision? What happens when you replace the text of Christian Archie comics with the text of Hélène Cixous? And, most important of all, what would it be like if Mr. Spock was a character in the HBO series Girls?

Illustrated throughout by the wonderful, full colour artwork of Maryanna Hardy!

Praise for I’m Not Scared of You or Anything:

"This book leapt up out of the box. It is an outrageously funny book—deadpan. The prose is sharply sliced, clean, and precise. Fiorentino is a master stylist writing from a broad range of interest, drawing on a well of compassion." (The Hugh MacLennan Award for Fiction Jury)

“I’m sure something scares Jon Paul Fiorentino, and maybe it drives him toward the deadpan magic he wields so masterfully in these pages. This is a daring and funny collection.” (Sam Lipsyte)

"Fiorentino smartly and brightly facilitates the reader’s journey into his mind. He has a talent for pointing to profound topics on being and belonging, evoking empathy in the reader, and getting a laugh at the same time. The author does as Andy Kaufman did when, performing as Mighty Mouse, he said, 'I’m not sure if you’re laughing at me or with me.' And everybody really laughed." (The Montreal Review of Books)

"Perhaps this is a glimpse at what the Internet would be like if people were much smarter, much funnier, and not horrible. You don’t have to like short stories to like I’m Not Scared of You or Anything. Anyone who has a pulse and a healthy love of chaos will get something out of this." (5 out of 5) (The Other Press)

Maryanna Hardy has worked as an artist, illustrator and screen printer and has published her work in publications nationally and internationally. She has designed countless gig posters and chapbooks of her drawings, built and ran a screen–printing shop in Montreal, and has painted public murals in Montreal and Toronto. She has most recently exhibited her work through Gallery Pangee and Gallery Youn in Montreal. In 2009 and 2010 she collaborated with the ypf Collective on their large-scale installation at the Osheaga International Music Festival in Montreal. In November 2010, she published a book of her drawings with Conundrum Press called So I’ve Been Told. The book was short-listed for Montreal Expozine’s 2010 Best Canadian Book and was also short-listed for a Doug Wright award for Best Avant-Garde Comic Book. She lives in Montreal.

Other titles by Maryanna Hardy

So I've Been Told