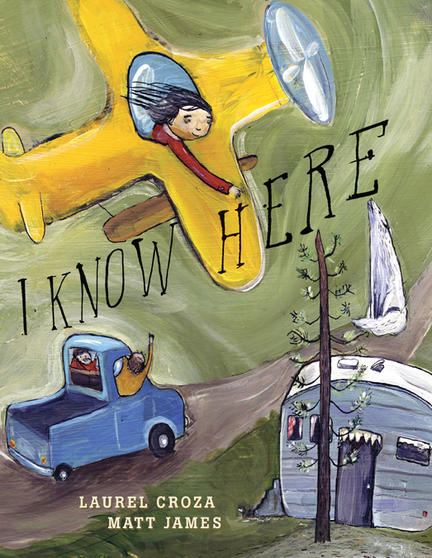 The little girl in this story lives with her family in a trailer in northeastern Saskatchewan, where her father is building a dam. She knows everything about the place she lives -- her road, her school, the forest where she plays hide-and-seek and where the wolf howls at night, the hill where she goes tobogganing in winter . . .

But the dam is nearly finished and when summer comes the family is moving to Toronto -- a place marked by a big red star on the map at school. Have people in Toronto seen what I've seen? the little girl asks. And with her teacher's help she finds a way to keep everything she loves about home.

This simple, beautifully written story, complemented by Matt James's vibrant, imaginative illustrations, will resonate deeply with anyone who has had to leave their home for a new place.

Laurel Croza lived near four dam sites when she was a child, moving nine times and attending six schools before she was fourteen. I Know Here, her first picture book, illustrated by Matt James, is based on her memories of leaving Saskatchewan for Toronto. It won the Boston Globe-Horn Book Award, the Ezra Jack Keats and New York Public Library New Writer Award, and the Marilyn Baillie Picture Book Award, among many other accolades. Laurel’s second book, From There to Here, picks up where the first left off. She lives with her family in Toronto.

The simple, straightforward text is spot-on in capturing the child's sensibilities and feelings...A regional look at a universal slice of childhood.

Teaching by the Book

This little book is not only a poignant treatment of home and stability making way for the unknown, it's a testament to the resilience of children. Laurel Croza, in her text, gives us a worthy protagonist as well as a glimpse of Canadiana most city kids will never experience ... it's a book worth buying. And sharing.

Worlds of Words, The University of Arizona College Education Review

Don't miss the endpapers, a map of the central provinces, embellished with a child's priorities.

...will resonate deeply with anyone who has had to move as a child.

Kids facing their own wrenching upheavals will take heart in the girl’s celebration of her roots and what she knows about herself and the world, all of which give her strength to move on.

Croza conveys beautifully the precise, multi-sensual awareness and familiarity that comes in childhood, in which knowledge of place can seem an inalienable part of identity.

The dam her father is constructing nears completion. A little girl and her family, now living in a trailer in the wilderness of north-eastern Saskatchewan, are about to move to Toronto. Just about everything that is familiar to her is about to change. “This is where I live. I don’t know Toronto. I know here,” she thinks. She then reflects on all the things she will leave behind when the relocation occurs to the big city: the road she walks on to get to school, the forest where she plays hide-and-seek, the smell of a fox’s damp fur, her tobbogganing hill, the howling sounds of a wolf at night, her school. The girl asks, “Have people in Toronto seen what I’ve seen?” With her teacher’s encouragement, she finds a way to take just about everything she loves about her home with her.

Author Laurel Croza has written a poignant story told from the perspective of a young girl whose whole way of life is about to change. One is moved by the sense of loss this girl feels as she contemplates a future bereft of the natural world she holds dear. This child may be young in years, but she is wise and so knows the strange dimensions of sorrow. This is beautiful and well crafted writing where simple words reach deeply into a reader’s soul.

Illustrator Matt James sees the protagonist’s world through her eyes. His energetic and vibrant acrylic artwork is childlike and connects beautifully with the text. As with the writing, the pictures evoke a tremendous sense of place.

Which reader would not be touched by the story’s conclusion as the girl decides to sketch her world to take to Toronto? “I will fold up the howl of the wolf and the smell of the fox in his cage and the stare of the old moose and the feel of my heart beating fast as I swooped over my road in a five-seater airplane. I will fold my drawing up small, put it safe in my pocket and I will take my road with me. To Toronto. In the summer. This is what I know. Here.”

This simple yet moving story will resonate with anyone who has ever had to move from one place to another. Moving from north Saskatchewan to Toronto, the little girl in this story recalls all she knows about her home and wonders how she will leave it behind. Her teacher helps her find a way to keep everything she loves about home.

Other titles by Laurel Croza

From There to Here

Other titles by Matt James

The Adventures of Garbage Picking Charlie

When the Moon Comes

From There to Here

What I Read on My Summer Vacation (Andrew Larsen).