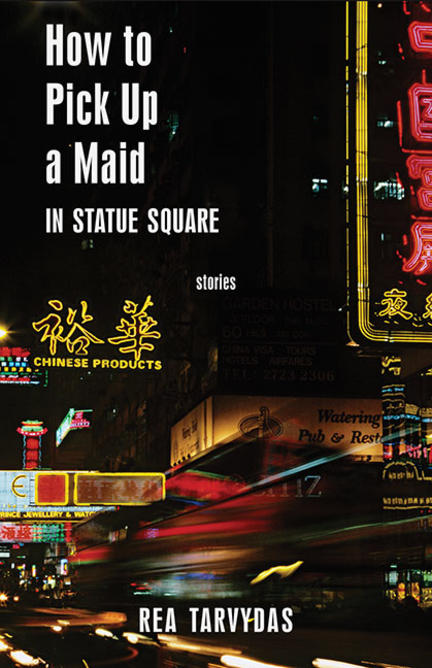 These stories collectively capture various versions of the expat life that share the feeling of being between two worlds, that experience of being neither here nor there and trying to find a way to fill that space.

The stories follow a kind of “life cycle” of expatriates in Hong Kong — a place often called the “most thrilling city on the planet.” They share the feeling of being between two worlds, the experience of being neither here nor there and trying to find a way to fill that space. From the hedonistic first days in How To Pick Up A Maid in Statue Square, as Fast Eddy instructs on how best to approach Filipina maids on their rest day; through the muted middle in Rephrasing Kate, as Kate encounters a charismatic bad boy and is forced to admit her infidelities; to the inevitable end in The Dirty Duck, as Bill realizes his inability to commit and resolves to return home to Australia; Hong Kong alters them all with its frenetic mixture of capitalism and exoticism. Characters exist between the worlds they once knew and this place which now holds them in its spell and shapes them to its ends. Their stories explore how they cope with this space where loneliness and alienation intersect, a place where insomniac young bankers forfeit their ambition while chasing deviant sexual encounters, or consume themselves with climbing the corporate ladder. It is a world where passive domestics live and work for the money they can send home, while their keepers assemble poolside to engage in conversations aroused by the expat’s desire to connect to others who share their fates. Always, of course, there is The Globe a favourite watering hole where, when night falls, they meet to tell their stories.

Rea Tarvydas now lives and writes stories in Calgary, Alberta. Her stories can be found in The New Quarterly, The Fiddlehead, and Grain magazines. Work is forthcoming in the Menopause Anthology (Inanna, 2017). Tarvydas is the 2012 winner of the Brenda Strathern Latebloomer Award, curated by the Calgary Foundation and presented at WordFest. In addition, her work has been nominated for a National Magazine Award. She has lived in Hong Kong and, as such, experienced one version of the expat life which is the genesis for this book.

Excerpt: How to Pick Up a Maid in Statue Square (by (author) Rea Tarvydas)

An immense black-and-white billboard of a near-naked man hovers in the polluted haze of Hong Kong. Over twenty stories high, the gigantic man leans, his head tilted back, against the soon-to-be-demolished Ritz-Carleton Hotel. His eyes are almost entirely closed. Tight white underpants contrast glistening black skin.

Leon finds he cannot sleep. Not that The Giant is staring, exactly; his eyes are barely discernible. Still, a vague feeling that The Giant is watching lingers in Leon’s consciousness, a feeling that, somehow, images are radiating onto The Giant’s retina. Not that Leon has enough time to sleep these days; he’s spending most of his spare time at the bank implementing the latest risk management system, a relatively simple install that isn’t anywhere near finished.

The party junks are tethered like unruly school children, jostling for a superior view of the dragon boat races. Brightly-coloured corporate logos hang from the flagpoles, publicizing the investment banks in Hong Kong.

The day turns overcast and the varnished teak decks of the party junks glow golden beneath imitation paper lanterns. Linked with ropes fore and aft, they are so close that one can hop from one junk to the next. I’ve heard that as the afternoon progresses, junior bankers jump the circuit, comparing parties.

On the congested deck of the Morgan Stanley I edge through the crowd, search in vain for a seat along the banquet benches. As requested, I introduce myself to Jerry’s clients and ensure their drink glasses are full to capacity, try to make small talk.

Lightheaded, I’m overtired from a combination of bursts of rigorous exercise, and the extreme heat and high humidity. Get a grip.

“We lost. What the hell happened?” asks Jerry.

“Just ran out of steam,” I say and swallow a bottle of water in one gulp. A waiter carries a loaded tray of drinks past and I grab a green-tinged cocktail. Mojitos. Fresh mint tastes like earth.

“Next year.” I pluck my sweat dampened T-shirt away from my chest.

“Next year is fucking right.” Jerry shakes a fist at Lehman’s party junk tied directly to ours. Merrill Lynch is tied beyond Lehman’s and Goldman Sachs’s farther beyond. Apart from their corporate logos, the party junks are identical, a financial flotilla.

“Turntables. Jesus. They’ve got a fucking DJ over there.” Jerry squints across at the Lehman party junk, so packed with bankers, clients and party girls that it sinks down in the water, at least one foot lower than the Morgan Stanley.

Alberta Authors You Should be Reading Right Now!

The author of How to Pick Up a Maid in Statue Square on stories....wild stories.